Caterpillar is releasing its 2.5 t lift capacity, super compact telehandler, the TH 255, which is a version of JLG's G5-18A (see lead story). The TH 255 debuted in the US at the World of Concrete Show last month and will launch in Europe at Italy's Samoter in March. The handler is made for Cat by JLG through its global telehandler manufacturing alliance.

Designed and manufactured in the US, but having benefited from design expertise in Europe, the TH 255 is in form and functionally the same as the JLG version, according to Sander Gesink, marketing manager in Europe for the Cat-JLG alliance. The Cat version does have a Cat engine and several other components, however, and standard on the European version is an enclosed cab. 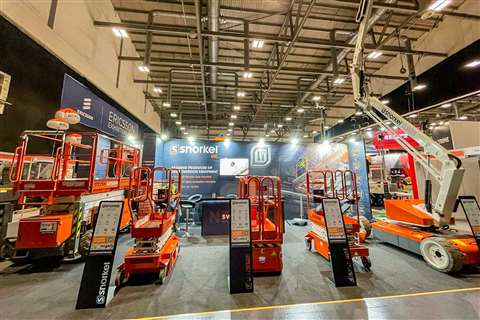 Snorkel highlights zero emissions at Executive Hire Show
On its stand is the S2755RTE lithium-electric narrow rough terrain scissor lift, among other products