Surge in Grove sales in Australia

Crane manufacturer Manitowoc reports that there has been a surge in the number of long-boom Grove all terrain cranes it has sold in Australia over the last 18 months. It attributes this to the machines’ combination of reach and mobility proving popular with rental companies. 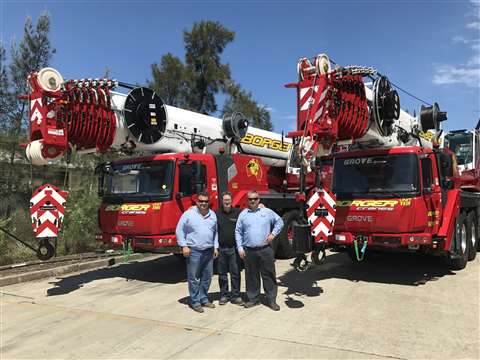 Manitowoc identifies New South Wales-based crane company Borger Cranes as being a key customer. The crane rental company has ordered five Grove units: two GMK5250Ls and a GMK4100, which are already being used, plus two GMK4100L-1s, soon due for delivery. Other companies Manitowoc has sold its latest generation of long-boom Grove all terrain models to, include:

According to Neil Hollingshead, sales director – mobile cranes at Manitowoc’s Australian office, a busier working environment meant companies have been looking for cranes that can take on more projects. “Infrastructure work is driving the market in NSW after the slowdown in Australia’s mining sector, while other states are showing signs of recovery as rental companies replace older models with these latest, state-of-the-art models,” he said. “The popularity of this current generation of Grove all terrain cranes comes from the fact they offer something different. Customers like their innovative design, which allows them to configure the cranes for a wider range of work. Also, their easier transport configuration means they can move more rapidly between jobs, improving return on investment.”