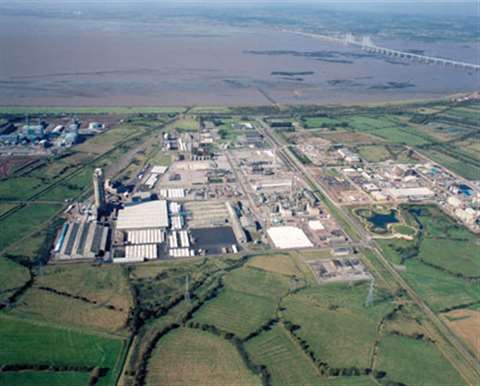 The 100 acre fertiliser plant at Severnside, Bristol, closed in April 2008 and is currently being cleared by Euro Dismantling Services Ltd

In what was possibly the largest industrial process plant demolition in the last year in the UK, Euro Dismantling Services Ltd (EDS), in conjunction with project manager and CDM Coordinator RVA Group, were brought onto the 100 acre Severnside site, near Bristol, by fertiliser manufacturer GrowHow UK Limited.

RVA began work at the end of 2007 to oversee the dismantling of the site at the end of 2007, with the site itself ceasing production in April 2008. RVA was given the responsibility of managing, supervising and regulating the decommissioning and clearance of the site's fertiliser production facilities, including nitric acid, ammonia, carbon dioxide and ammonium nitrate plants, along with utilities equipment, laboratories and office buildings across nine separate locations across the Severnside site. The 32 week demolition programme was completed at the end of January 2009.

In addition to the normal challenges imposed by such large scale industrial demolition projects, one particular structure created a major challenge to the demolition team - a 100 m (328 ft) tall tower that was central to the production of ammonium nitrate fertiliser prills (granules).

The Prill Tower was a tubular 4,000 tonne reinforced concrete structure supported by 12 reinforced concrete legs with pressure vessels mounted at the top. These were reached by an external lift shaft and attached staircase. Its height meant that it was considered too tall to be brought down using conventional machinery and manual dismantling was also ruled out since it would have required the demolition crew to work at height for extensive periods of time.

As project managers, RVA considered that the health and safety risks that would result from such a labour intensive solution were just to great to be run. An additional consideration in its health and safety concerns was the fact that the tower had been used for ammonium nitrate production for many years.

Controlled implosion was therefore selected as the best solution, but an obstacle immediately became apparent - ammonium nitrate itself, under certain conditions, has the potential to explode. RVA operations director Ian Wharton said: "If such chemical residue was subject to either significant impact - as would be experienced when the tower hit the ground during the demolition process - or was to come into contact with a heat source, there was a risk of secondary detonation and explosion." This risk had to be eliminated before a final decision was made.

RVA therefore took samples from the structure and floor slabs to assess the degree of contamination, engaged in consultations between its explosive engineers and outside consultants over the properties of ammonium nitrate and theoretical explosives. It also led a series of collaborative hazard study workshops to ensure that each party fully understood the issues and the demolition contractor selection process was carefully managed, and rigorous examinations of each bidding company carried out to ensure the required standards would be meet - a process that resulted in the selection of EDS. As part of the tower implosion plan, EDS was required to engage an additional independent explosives expert to provide a secondary assessment and confirmation of RVA's finding

Finally, an extensive decontamination of the tower internals was carried out, as was a video inspection to validate the cleanliness of the structure of the tower.

RVA and EDS then worked with vibration specialists to produce calculations that demonstrated the demolition would cause no damage of disruption from vibration, air over pressure or dust to adjacent installations, including a gas-fired power station, pharmaceutical manufacturing facility, high pressure underground and overground gas and liquid fuel pipelines, as well as overhead high voltage power lines. Dust suppression was achieved using water fog generating equipment. In addition, community meetings were held with all Severnside businesses and residents to ensure clear, regular communication on all blowdown-related matters.

EDS carried out a test blast that removed one of the tower's legs to validate charge weight, drilling pattern and primary protection. EDS then devised a collapse mechanism that involved the explosive removal of the remaining front five legs that would ensure the tower would rotate about a hinge formed by the rear six legs and fall in a north-easterly direction. The charged legs were wrapped in several layers of chainlink mesh covered with geotextile fabric and additional specially fabricated steel plating to contain and minimise and debris spread. A personnel exclusion zone extending from 200 m (656 ft) to 300 m (985 ft) was established immediately before the blowdown.

The Prill Tower was then brought down by just 13 kg (28.6 lb) of explosives, strategically placed in 42 locations, in less than 10 seconds.