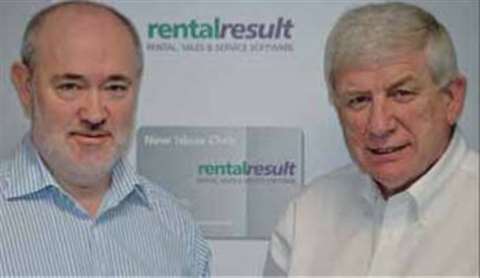 “The SAP agreement opens some big doors and some big opportunities. It is a major breakthrough for us” Derek Robson of Results Group

The UK-based rental software company has been growing rapidly and has a number of significant new developments under its belt. One of the most important has been the recent agreement with SAP – the US$12 billion (€8.4 billion) business software giant – that sees Result become SAP's official partner for the rental sector.

“It opens some big doors and some big opportunities. It is a major breakthrough for us”, says Mr Robson, the Northern Irish software salesman who in 1994, along with business partner David Griffiths, bought out Dataspeed, a general software company software company that the two changed into Result Group.

It's a link-up that plays into one of the strengths of Result – dealing with major rental companies. In the past, Result has chosen to focus on bigger rental contacts, valued at £500000 (€675000) or more. This strategy has seen it land some big names: NES Rentals, Bechtel, MVS Zeppelin, Volvo Rents, Nationwide, Carrier Rental, Ainscough Crane Hire, Nationwide and others. Its most recent big order is with Select Plant Hire, the internal rental division of Laing O'Rourke and one of the largest and fastest-growing rental companies in Europe.

This strategy has also allowed the company to make the big step of opening a US operation, a move made several years ago on the back of a big contract with portable space rental company Mobile Mini Inc. That initial contract win has been followed by several others, including Godwin Pumps, NES, Bechtel and two Caterpillar dealers, Foley Cat and Wyoming Rents.

Its status as a serious player on the US market alongside domestic competitors like Wynne Systems was sealed last year when Caterpillar chose Result as its recommended rental software supplier for its Cat Rental Store partners worldwide. Both the Foley and Wyoming contracts were signed following Cat's endorsement, and Derek Robson clearly hopes that more will follow.

However, if the big contracts and the SAP linkup suggest that Result's focus remains firmly on the larger players, you would be wrong. Mr Robson tells IRN that a key strategy for the company going forward is to target much smaller companies with its recently introduced off-the-shelf ‘Budget' package.

This software is targeted at contracts valued at around £50000 (€67500), with maybe 20 users, and capable of being installed in one or two months. “A lot of customers at this size don't want to customise their software, they are too busy out working”, says Mr Robson. “We tell you what you get, and you don't change it.”

“Budget means that we can now sell to 80% of rental companies rather than 20%. It also means the company can look at small companies that are growing fast – the big rental companies of the future.” says Mr Robson of Results Group

That kind of solution will not be ideal for everyone, with the company's ‘Classic' package, a more bespoke solution, being a popular choice for larger companies – Select Plant among them – or the premium ‘Custom' package that gives rental companies the opportunity to customise and develop the software in any way that they like. Mr Robson points out, however, that even some large customers will be happy with Budget.

Result is also offering an ASP solution, where it hosts the software and customers data on its own, secure servers.

He and Mr Griffiths, who is financial director and an accountant by profession, are also grooming a senior management team, which comprises three other directors: Helen Sowerby, business development director; James Horsfall, who leads the US operation based in Phoenix, Arizona; and Robin Barter, who is in charge of UK and Europe.

He says he thinks Result has the potential to be a £50 million (€35 million) company; “Our target is market leadership in equipment rental within three years.” He estimates the rental software market to be valued annually at between $500 million and $1 billion (€350 million and €700 million), based on an assumption that rental companies will typically invest between 1% and 2% of their annual revenues on software (a typical bank will invest up to 3%, he says).

It's a typically ambitious target, but not one that will be chased any cost. “Our view is, get it right, get it right, and then go forward”, says Mr Robson, who is conscious there is a danger of overstretching the company's 70 employees.

They have been successful in managing growth so far, and you wouldn't bet against them maintaining their record. Mr Robson thinks that one of the reasons they have prospered has been the focus solely on the rental business. That isn't the only thing; “The other secret”, he says with a smile, “is not to do the deal from hell.”