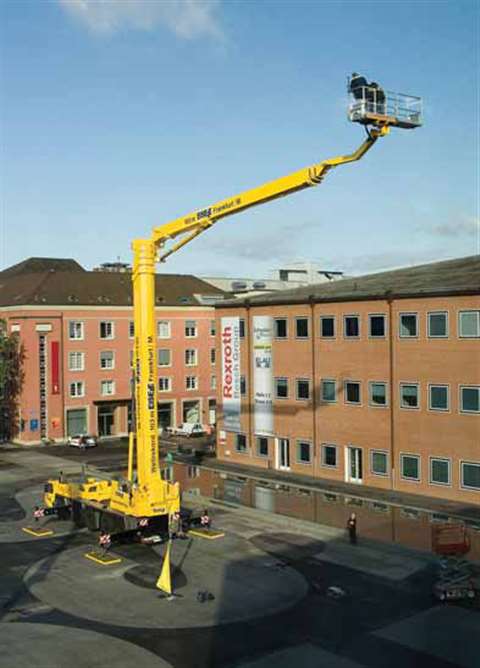 Wumag has raised by about 2 m the maximum height accessible from a mobile platform with its new Elevant WT 1000. The 100.5 m platform height machine has a nominal maximum payload of 600 kg and a maximum outreach, with 200 kg of payload, of 36 m.

If height is the 'headline' feature, almost as important is the carrier type. Wumag opted for a 60000 kg GVW crane carrier designed for moderately rough off–road surfaces to meet the new model's intended primary use for wind turbine erection and maintenance.

Wumag spent 3000 engineering man–hours modifying an all–terrain crane chassis from Tadano Faun (see box story) in Germany, and designing a turret to accept the articulated boom of its new design.

The use of a crane carrier also makes the machine look extremely compact, and it is – comparatively speaking – with travel dimensions of 16.2 m (length), 2.75 m (width) and 3.99 m (height).

Working at great heights means that users need to feel safe, and a feature that will find favour with operators is a doubled stiffness of the booms compared to Wumag's previously largest machine, the WT 850, introduced in 2000. As Wumag's general manager, Ludger Greskötter, says, “It is not a stretched WT 850.”

The impact of this stiffening is immediately apparent when you take a trip on the machine. As one enthusiastic Wumag customer put it; “It's not like a basket, more like a balcony.”

Wumag has also been thinking about increasing the machine's flexibility of use. For example, unlike some other big machines, the WT 1000 can swivel its boom before being raised, allowing it to be set up to the side of the machine. This means the carrier doesn't need space at its rear, and allows it to be placed close to buildings or obstructions.

The control system of the boom is the same as that of the WT 850 and uses third–generation CANbus technology. Integration of boom and chassis controls was eased because Wumag and Tadano use the same control components.

Separate hydraulic systems power the boom and the outriggers, which are supplied by Wumag. However, a hydraulic motor in the chassis system is coupled with a pump in the boom circuit to back up boom hydraulics.

First buyer of the new model is German crane and access equipment rental company Eisele, and general manager Wolfgang Latton said the company is considering a second purchase. According to Wumag president Jürgen Schroeder, Claus Eisele, founder and chairman of the Maintal–based company, told him, “I help to erect the turbines, and the next step should be to maintain them.”

Another buyer, perhaps surprisingly, is Netherlands–based access rental company Riwal, which has bought three units. The purchase “...creates a new market for us, it takes us away from cranes,” said Riwal's managing director Dick Schalekamp. Riwal will take delivery of its first WT 1000 in March 2008 and the two others in 2009.

Mr Schalekamp said the main business, “about 80%”, for its WT 1000s will be re–rental, although “... we are close to a three–year contract with an end user.” He also told AI that the company is considering buying two more.

Mr Schalekamp sees the big Wumags as significant to the company's expansion plans in Europe. Their 60000 kg GVW means, “They can go on any road in the world,” he said.

Wumag said it has sold 11 of the WT 1000 and is “close" to selling two more. Wumag's sales director for export Stephan Kulawik told AI that strong sales means there is no need to offer it through its Elevant Finance (formerly CharterLIft) leasing and re–rental service.

It took Wumag 17 months to build the first unit after securing Tadano's commitment to deliver a chassis. However, “Getting the parts was very demanding,” said Mr Greskötter. To help improve the supply chain, Wumag bought one of its major component suppliers, Mageba Stahl– und Gerätebau GmbH in December 2006.

Also helping will be a new 960 m2 production facility in Ebersbach, to be working by the end of this year, and a 7600 m2 commissioning facility. Production capacity for the WT 1000 is five units a year. Delivery times now stretch into 2010

Mr Greskötter told AI that Wumag will have I recovered product development costs after sale of eight units and that the company is getting down payments when it accepts orders. He said also that the price of the WT 1000 is climbing as market demand and manufacturing costs rise.

The completion of the WT 1000 means that product development capacity is now available for other models. Mr Greskötter indicated that its new focus would likely be on the 3.5 to 7.5 t GVW segment. “We will improve our existing products, but I think we also will make a new machine, a 3.5 t”, he said. “It will not be large working height that will be its focus, but rather access flexibility.”

If Wumag's hard–working design engineers thought they were due for a break, they will have to think again.