Engineering manager Peter Southerden is retiring from crane monitoring systems specialist RaycoWylie after 50 years of service at the company.To mark the occasion, and to thank Peter for all his hard work during that time, the company had a small ceremony and party on its stand at the Bauma trade show in Germany.

He started as a drawing office assistant and, according to RaycoWylie, soon became a popular and respected member of the team because he took on complex mathematical tasks that others were reluctant to take on.

According to RaycoWylie, Peter’s role has primarily been behind the scenes, supporting the company and playing an intrinsic role in many engineering projects over the years. Many readers may be familiar with Peter’s initials PAS on the bottom of the company’s wiring diagrams. In addition, Peter has written all the calibration manuals for RaycoWylie’s i4500 range of systems.
RaycoWylie said that without Peter’s vital input into software specification and standards the company would not be where it is today. At the retirement Party Peter commented, “It’s been a Wonderful 50 years. I have travelled the world and met many great People during my time with the Company.” 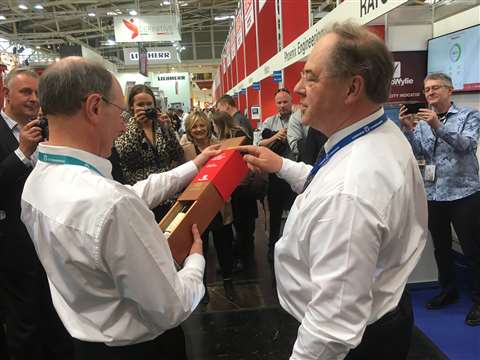 Peter (left) at his retirement