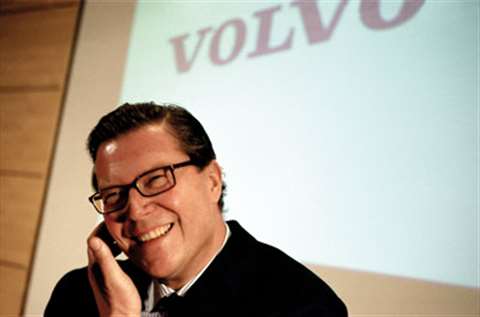 Last month saw the Volvo Group hold something of a technological open day in Gothenburg, Sweden in which it showcased a huge range of new and emerging technologies applicable to its various products. The ‘2008 Tech Show' is part of a series of initiatives Volvo is taking to emphasise its research and development work, as well as to send a message to politicians about how they can help industries improve and invest.

Speaking at the Tech Show, Volvo Group CEO Leif Johansson said, "We are asking for long-term criteria to be set up by governments and regulators. The more structure we have, the better."

One of the major focuses of Volvo's research is the fuel efficiency of its products. It is an issue that has grown in importance over recent years due to the rise in the price of oil, and increasing public concerns about climate change.

On-highway trucks make up the vast majority of Volvo's sales, and the company is one of a handful of major global players in the sector. In the 12 months to the end of March this division had sales of SEK 199 billion (€ 21 billion) - about two thirds of the group's total revenues.

It is fair to say that Volvo's presence in the truck market is a major driver of its research efforts. However, much of what it is learning in this area has potential to be applied to its construction equipment business, which accounts for about 19% of Group sales, as well as its bus and engine divisions.

A big area of interest at the moment is hybrid vehicles, where electric motors and batteries are used in power trains alongside diesel engines. March's ConExpo exhibition in Las Vegas US saw Volvo unveil the world's first hybrid wheeled loader (see April's equipment pages), but this is in fact what Volvo describes as a "mild hybrid."

The word the use of the word "mild" means that the electrical drive system can take the strain from the diesel engine in parts of the cycle where it is inefficient - low revs. However, the electrical system is not powerful enough fro the machine to operate form it alone over a normal work cycle.

But the 2008 Tech Show also saw Volvo demonstrate a fully hybrid bus, which it claims consumes 30% less fuel than a traditional vehicle. There are further benefits to the system that are particularly important in urban transport, such as the lower noise and lower overall emissions that hybrids can deliver.

Much of what Volvo showed in Gothenburg were ideas that could come to the market in just a few years, and according to Mr Johansson, this makes it a good time to unveil them to the public. We want people to put trust in technology and trust that it will deliver value."

But Volvo is also looking further into the future with ideas that "look promising for the future," and Mr Johansson describes himself as a "technological optimist."

Expanding on the point he said, "We can achieve drastic changes over time if we invest now. There is good reason, looking at history, to say we can achieve much more than we might think.

"It is just as important to find out what doesn't work as what does."

As well as doing the hard research, Volvo is also examining ways to take promising ideas and turn them into products quicker. "We are also exploring how we can bring technology to the market quicker and in a more entrepreneurial way," said Mr Johansson.

This includes initiatives such as making small (In Volvo's terms) equity investments in start-up technology companies.