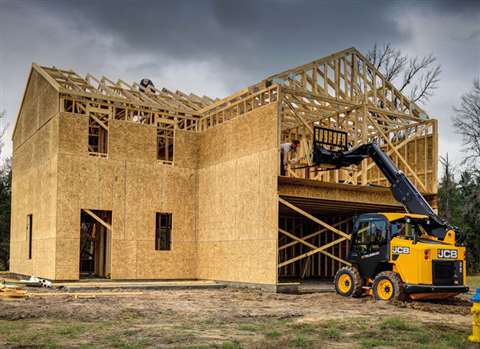 The JCB Teleskid has a forward reach of 2.4m

As the manufacturers of telescopic handlers strive for greater efficiency, they are often looking to reach higher too, and to have the ability to carry heavier loads.

Magni, for example, has launched a new rotating model – the RTH 6.46SH. This telehandler can reach up to 46m in height, which the company said was the highest ever reach for a rotating telehandler, while it added that it had a 6 tonne maximum lifting capacity.

It said the perforated boom was lighter and improved lifting capability on the long reach, while at the same time operating safely. It added that the model had a lifting capacity of 2.5 tonnes with the boom extended to the maximum.

Operator comfort, as well as safety, is an issue for telehandler manufacturers, and Magni said that all the cabin comforts and options common to its RTH range were standard on the new machine too. These include air conditioning/heating, touch screen display and load sensing circuit (350 bar).

Magni said that versatility was a crucial feature of its models, including being able to change attachments easily and quickly. It said this made it possible to have a single vehicle that performed three different main functions – for example, telescopic handler when equipped with forks, aerial platform if equipped with basket, or crane if equipped with winch or jib with winch.

The Smart series is made up of the RTH 5.18 Smart, RTH 5.21 Smart, RTH 5.23 Smart and RTH 5.25 Smart, with working height up to 25m. They are said to have compact dimensions while maintaining “enviable lifting capacities”. Magni said the pivoting stabilisation system guaranteed optimum lifting performance.

The new TH514D telehandler from Caterpillar has a 75kW Cat C3.4B engine, a rated load capacity of just under 5 tonnes, and a maximum lift height of 13.88m.

Cat said the TH514D’s updated hydraulic system provided fast, powerful, multi-function performance, which was complemented by its long-wheelbase stability and its ability to handle a range of work tools.

It can take attachments that include forks and a choice of carriages, buckets, truss booms, winches, pipe grapple, sweeper, material-handling arm, concrete bucket and fork-mounted platform.

Additionally, a lifting lug with capacity matched to the rated capacity of the machine has been added to the underside of the boom head. Cat said this eliminated the need to remove a fork carriage for tethered lifting.  A manual Cat IT (integrated tool carrier) attachment coupler is standard, and a hydraulic coupler is available.

Service brakes are the oil-immersed, multi-disc type on both axles, and the manually actuated parking brake works with the TH514D’s front-axle brakes.

The TH514D’s closed-centre, load-sensing hydraulic system is said to reduce the load on the pump and save fuel using a variable-displacement, axial-piston pump and flow-sharing valves, delivering rapid hydraulic response by matching pressure and flow to the task. Cat said the hydraulic system was designed for smooth, consistent, multi-function operation, with rapid cycle times.

It added that to simplify routine maintenance, service points were accessible from ground level, and the longitudinal placement of the engine and large hood provided easy access to the engine, coolers and hydraulic components.

JCB has previewed what it describes as the world’s first skid steer and compact track loader with a telescopic boom.

The JCB Teleskid claims to be able to reach 60% further forward than any other skid steer on the market and it is said to be the only skid steer in the world that can dig below its chassis to an unparalleled depth of around 1m.

JCB said it had pioneered telescopic technology with the launch of the Loadall nearly 40 years ago. Nearly 25 years ago, JCB also introduced the industry’s first single-arm – or Powerboom – skid steer.

Now the company said it had gone a stage further by combining both technologies into one to produce the Teleskid.

The Teleskid has a forward reach of 2.4m – which JCB said made it 60% better than the nearest competitive machine. With a lift height of 4m, the JCB Teleskid is said to reach 8% higher than any other skid steer in the world.

Chief innovation and growth officer Tim Burnhope said, “The JCB Teleskid can do the work of four machines – a telescopic handler, masted forklift, compact loader and a skid steer, all in one easily-serviced machine.

“The telescopic boom will allow operators to load trucks without a ramp, reach over kerbing and dig below ground, all with clear visibility of the attachment.”

Tracked and wheeled Teleskid models will be sold in North America, while European markets will be offered the wheeled variant which is most popular in that region.

JCB has developed what it claims is the world’s first dual technology transmission designed specifically for its Loadall range. It said it combined the best characteristics of powershift and hydrostatic drives.

It added that the flexi mode provided independent engine and ground speed control, while selectable full-time 4WD or Auto 2WD over 19k/h, for optimum driveline efficiency and reduced tyre wear.

“The result is a machine that is up to a massive 25% more productive than competitive models. Drawing on our expertise in both hydrostatic and powershift transmissions, Industrial DualTech VT is a massive achievement for our design and engineering team, who have raised driveline technology to new heights.”

JCB has launched an 18m Loadall model – the 540-180 HiViz – expanding what it claimed was already the world’s biggest range of telescopic handlers, with the number of Loadalls now standing at 30.

The 540-180 is said to offer greater performance and lifting capability than its 17m stablemate, the 540-170 – despite being 20% smaller in overall dimensions.

At 2.35m wide and 6.26m long, it is possible to transport two machines on a single curtain-sided truck or low loader, which has the benefit of reducing transport costs.

The synchronised boom design is said to provide smooth and precise boom movements with faster extensions and retraction, to improve overall cycle times. A regenerative Smart Hydraulic system on the optional single lever control uses gravitational force to aid lower and retract functions, and reduces the energy required during operation.

Bobcat has launched a new range of rigid frame telehandlers aimed at the construction and rental industries.

Manufactured at the company’s plant at Pontchâteau, France, Bobcat now offers a choice of 11 new telehandler models covering maximum lifting capacities between 2.6 and 4.1 tonnes with lifting heights from 6 to 18m.

There are also the T35.130S and T35.140S models aimed specifically at the rental industry.

The new generation telehandlers incorporate several new features such as an automatic parking brake with what Bobcat described as an intuitive operation similar to those used in the automotive industry.

Another new feature already available as standard on the TL26.60, TL30.60 and TL35.70 models covering lifting heights up to 7m, is Bobcat’s Eco fuel saving mode, which is also now incorporated on the larger Bobcat powered telehandlers with lifting heights of 10m and above, encompassing all the models from the T35.105 to the top-of-the-range T40.180SLP telehandler.

The Eco system is activated by pressing a button on the dashboard, and Bobcat said that it maintained optimum hydraulic performance without using the engine’s full power, adjusting the main machine features to produce a balance between top performance and providing the best performance/fuel consumption ratio.

The TL26.60 and TL30.60 are available with two different overall machine heights, with a cab which can be mounted in two different ways – in a low position that results in the very low 2.1m height or a higher position to optimise visibility.

On the TL35.70, replacing the TL470, there is an improved load chart providing an additional 500kg of lifting capacity at the maximum lifting height of 6.97m.

Faresin launched an ultra-compact model – the 6.26 – last year. The machine was completely redesigned and is now able to lift 2.6 tonnes compared to the 2.5 tonnes in the previous version.

The chassis has also been looked at, with the pitch reduced by 25mm, and the total length of the machine was reduced by 300mm. The company said there was, therefore, a significant reduction in the turning radius.

The engine incorporates, as standard, a cyclonic pre-filter system which allows it to be used in dusty environments.

As with the company’s other new models, the shovel mode has also been introduced for the new 6.26, which Faresin said allowed the machine to guarantee high performance when working with the bucket.

The company also introduced a new range with outriggers last year. The models were completely reviewed in terms of design and performance, designed specifically for the construction industry and for the rental market.

The HTL4017 telehandler from Haulotte is said to improve working output, safety and the comfort of the operator, with lifting capacities of 4 tonnes and lifting height to 17m.

The company said it could lift 2,500kg to full height and had a strengthened four-stage, chain driven boom and an improved chassis construction.

The machine comes with an optional reverse sensing system, reverse camera and a number of different options.

The FOPS/ROPS approved cab, has an electronic and backlit dashboard, and 360° visibility thanks to its lower boom pivot point and engine compartment.

There is an automatic rear axle locking system that comes as a standard, and stabiliser legs have a wide spread so that load capacity is maximised throughout the lift envelope.

In addition, the Load Moment Indicator (LMI) is automatically activated to control the boom functions to help maintaining the longitudinal stability.