Terex is expanding its aerial platform facility in Changzhou, China, allowing the addition of some materials processing and utility aerials products and creating a ‘campus site’ in the country.

At the end of November the company will break ground on a 100,000ft2 extension of the 360,000ft2 Changzhou facility, which is currently almost entirely dedicated to access equipment. Terex started work on the original site in 2008 and extended in further in 2011. 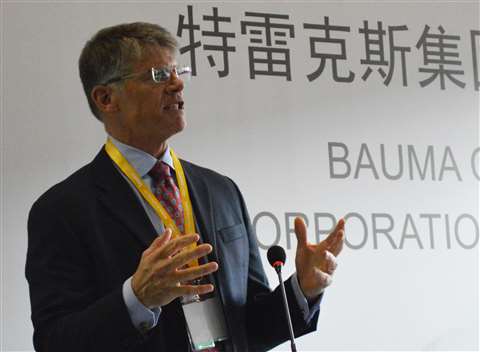 A key element of the expansion will be to localise production of its insulated aerial platforms used for live line working in China. Terex currently imports utility booms from the US for mounting on Chinese trucks by its local partner Xuzhou Handler Special Vehicle Company. The plan is to localise boom production at Changzhou, with the partnership with Xuzhou Handler to continue.

John Garrison, Chairman and CEO of Terex Corp, said the venture with Xuzhou Handler was very important and would remain in place.

The investment in Changzhou – with the extension possibly completed by the end of 2019 – aims to create a ‘campus manufacturing’ site for Terex in China, leveraging the local engineering and technical expertise built up over the past 10 years.

Meanwhile, Garrison said US tariffs introduced on Chinese materials and components – tariffs 232 and 301 – had driven up the cost of steel and aluminium “quite significantly. It has impacted our business, and any US industrial business…We have to implement a strategy to address that impact, and we are doing that.”

He said Terex had already developed a robust supply chain in China. The business has also initiated a Global Strategic Sourcing Initiative, with the aim of consolidating its US$3.5 billion annual spending on materials and components. China and China-located suppliers will be an important part of that strategy.

Terex is this year celebrating a number of milestones in China. It opened its first Chinese office 30 years ago, and it is 20 years since the creation of the first Terex AWP office. It has also recently built its 50,000th access platform in the country.

“The future of Terex China is quite bright”, said Garrison.