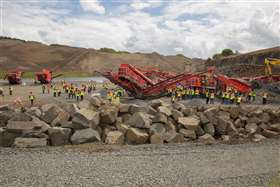 In total more than 350 people visited the site during the two-day event.

The prototype model 684 three-deck inclined screener that will be launched before the end of 2017 was also showcased.

The event and product demonstration were hosted by Alex Brewster & Sons at its Craigpark Quarry.