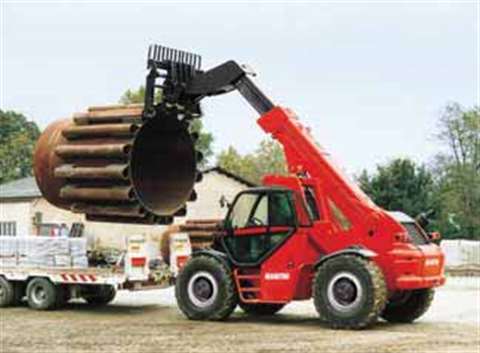 The last six months, it seems Manitou North America has been more aggressive than most. For starters, it is releasing several new products this year. Also, it has had staff changes and has expanded its warehouse capabilities in Waco, TX, where North American operations are stationed. These are exciting times for the company and its dealer base, it seems.

The French-based Manitou Group, parent of Manitou NA, reports strong earnings last year with €1,263 ($1,848 million USD) with a 12% growth from last year. The Group doesn't specify which portion of that figure is US sales, but the company's North American President Serge Bosché says that US sales figures are fair.

“I can say that we're a small portion of that number, but a growing one,” says Bosché. Although the company reported pushing out 900 units last year, this year it has higher goals with the launch of its new products, in particular its new high capacity handlers and truck-mounted forklifts.

As a sneak peek to what it will bring to Conexpo, the company brought along its latest models of truck-mounted forklifts, the TMV masted machine and TMT 4-way bi-directional telescopic boom mounted unit (see Sidebox) to World of Concrete.

Then, at this year's Conexpo, the company will bring its MHT 10160, which is an existing line in Europe but new to the North American market. But its MHT 10210 will be the largest telescopic handler available in the world with its heavy capacity of 46,000 pounds. Several manufacturers have introduced machines as of late – Pettibone and Gehl – with enhanced load capacities. Does Manitou see this as a definite trend?

“What you've heard from [these companies] is more of a 'playing with the load chart' than a new model; stretching a machine from 10,000 to 11,000 pounds. I don't think this is what we have with our machines,” says Bosché.

“Ours is designed from the ground up as an ultra-high capacity machine, and the product itself is very different. You won't see this machine on your standard construction job site. It's addressing markets that the telescopic handlers, as you know them today, have not addressed in the past. I'm thinking mining, heavier world constructions, wind farm constructions, pre cast and more,” he says.

Kirk Zander, who was recently promoted to director of sales and marketing, succeeding Ed Ugolini, adds that the high capacity telehandlers Manitou provides could steal smaller crane market share. To illustrate his point, he says the MHT 10160 that will be on display at Conexpo will from there travel to its new home with Ideal Crane, a crane yard in Madison, WI. Its larger MHT 10210 was also sold to its dealer Transport Equipment Services of New Jersey. “It costs a lot of money to set a crane and use a crane. You're limited to one spot. The forklift is truly mobile. You don't have to set outriggers or have a crane-licensed person to operate the machine,” says Zander.

Last year, the market took a drop for all manufacturers of telescopic forklifts. It wasn't a horrific year, per se, but down nonetheless from 2006. Does the company feel the market is going to rebound?

Bosché says the new models are being introduced based on demand from its dealer network. Zander adds; “Today, the market in general is sluggish, but the telehandler business is strong and will remain strong on the construction side of what we see in the future.” Bosché says that even though the poor residential market will impact several companies, it hasn't so much hurt Manitou's line because of its full product range.

Also in the works this year is the completion of its Tier III compliance to its full range of equipment. “It's a work in progress. I'd say we're 80% there,” says Bosché. The goal is to have everything completed by the end of this year.

It should be noted that in Europe, Manitou has a line of aerial equipment that includes booms and scissors. However, at this time, Manitou NA has no plans to introduce any of those lines in the US.

The company also completed last year its new customer service center/distribution facility in Waco. The center is an expansion of an existing facility and quadrupled its current storage capacity.

“It's been a very good investment for us,” says Bosché, “We have a lot more space since we quadrupled the amount of square footage we have in Waco, specifically for our parts business.”

Bosché also reports that the company is expanding its service capabilities through new Internet-based software for its dealers which should happen in the spring. “We're not at a stage where we want to announce anything specific, but we have invested and are in the process of going 'live,' which should happen in two to three months. It will help them source parts, identify parts, buy parts and service documentation on the Internet.”

Currently, the company has more than 80 dealers in the US, with approximately 200 branches and locations. To address Manitou Group's customers in Canada, which are currently handled mostly from France, Manitou NA is looking into ways to help service that country. “Because of the exchange rate between the Canadian dollar vs. US dollar, we are working closer with the Manitou sales organization up there [in Canada], trying to take advantage of lower production costs here than in Europe. And also we are working to give better service to the Canadian dealers,” says Bosché.

“We are currently supplying some Manitou NA-built product to both Canada and South/Central America with some supplemental European product pending availability. Our goal is to assist our subsidiaries in getting timely product. This is a somewhat new arrangement that we anticipate growing over time,” says Zander.

Remarking on the 2008 market, Zander predicts a continued slowdown of the total market but not as drastic as 2007.

“Regarding company sales, I think we anticipate close to last year because of the market, with some growth with the introduction of our new products, the TMT and MHT,” says Zander.

Looking further into the crystal ball, both Bosché and Zander forecast 2009 to be sluggish the first half of the year, with a possible rebound in the residential market the second half. Regardless of how things work out, it will be an interesting next couple of years from the company to see how its new products perform and how it is able to service neighboring Canada and South America.

“Manitou is the world's largest manufacturer of rough terrain [forklifts]. We have typically a 30%-plus market share of the world. Our goal is to increase our market share here in the US to better reflect that position in the American market. Even though our name is known here, we're still a smaller player than we typically are in any other market in the world. So we want to change that and grow our market share here and consolidate our place of number one in this business,” says Bosché.