The end for Madrid's Edificio España 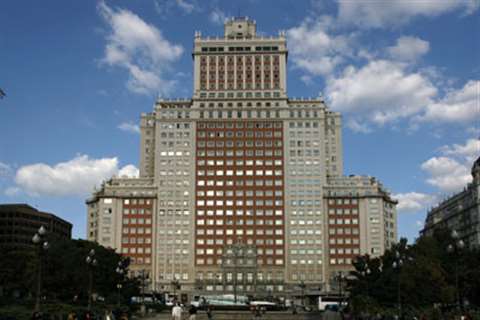 Spanish contractor Detecsa is currently working on the demolition of the Edificio Espana, one of Madrid’s most notable buildings, using largely manual methods. D&Ri reports on the job

For four years, at 111 m (384 ft) high, the Edificio España was the Spanish capital’s tallest building following its completion in 1953. Designed by architect Julio Otamendi and his engineer bother Joaquin, it offers views over the Ralacio Real and Parque de la Casa de Campo. The building housed the Crowne Plaza Hotel as well as a shopping centre, residential apartments and other accommodation and offices.

The building contained 28 floors - the lower floors cover 4,400 m2, an area that gradually decreases to 800 m2 on the top floors - and has a total volume of 200,000 m3. Its distinctive appearance was achived by the use of alternating brick and limestone and the use of a Baroque doorway in the main façade.

Because of the nature of the site, Detecsa is using manual demolition methods on the building, and work in phase one is mainly concerned with the interior partition walls, floors, roof and utilities. Residential and hotel sections, the lining of the concrete structure and the façade sections will be demolished in phase two. The total area removed during phase one will be 55,000 m2 and it is expected that 18,000 m3 of demolition waste will result from the work, made up of concrete and brick rubble, wood and scrap metal.

In order to process this waste efficiently, Detecsa has established a rigourous waste separation regime. Clean and mixed rubble is segregated and sent to the Tec-Rec processing plant, wood is sent to Reciclajes Rasoel in San Fernando de Henares, dirty rubble and waste is sent to Canada Rean in Salmedina and scrap metal goes to Almacen de Detecta in Madrid.

In order to provide protection from falling debris, a canopy has been erected on the back wall of the building between the first and second floors to protect pedestrians and traffic on the calle Maestro Guerrero below.

Detecsa has organised the building into five vertical zones to carry out the work. In each zone holes have been made in each concrete floor and hoppers installed, with waste falling into the hoppers being removed by conveyor belt to trucks in loading areas on calle Maestro Guerrero and San Leonardo. On each floor, demolition debris is moved by hand truck to the nearest hopper. Debris from the two underground floors is moved by loaders to the trucks via the car park ramp.

The greatest challenge that faces Detecsa is where the utilities (water and electrical supply) are concerned. Over the years the building has been in use, these have been altered and modified without any changes being recorded on building plans. In addition, the building’s water services to the hotel, accommodation areas and fire suppression systems are supplied from the same water tanks. Detecsa has to maintain the fire prevention system, including hydrants, sprinklers and detectors, and the 32 lifts in the building in operational condition. As a result, the building’s electrical and water systems cannot be completely shut down and any shut downs that do occur have to be managed to ensure that no area of the building is left without water or electricity.

On average, 100 Detecsa personnel are on site every day, using the minium of machinery. In fact two loaders and two mini-excavators, working in the underground levels are the only mobile machinery working in the building.

Work began in August 2007 and was scheduled to last for nine and a half months, but the Detecsa team has been so efficient at carrying out this demanding manual demolition challenge that the end of phase one will be reached by the middle of April 2008.