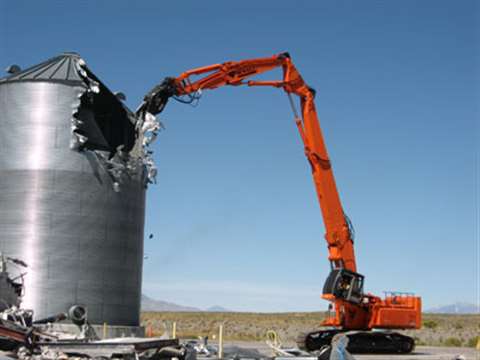 It is not just in Europe that specific industrial sectors are demanding specially modified versions of today's hydraulic excavators. In the USA, the requirements of the US Department of Energy for machines capable of assisting with the decommissioning of a number of buildings on the Hanford Nuclear Reservation and Idaho National Labs have led to the development of a number of machines specifically modified for the purpose by Jewell Attachments.

In addition to a traditional demolition guard, the machines' cabs have been retrofitted with heavier frames and armoured glass. In addition, all three are hydraulically elevating and tilting to provide optimum visibility at the tool.

The machines have also been fitted with boom cameras as a further aid to visibility, a dust suppression capability, a modular joint to allow quick changes to a standard dig boom and feature Jewell's proprietary IQAN based control and safety package. In addition, Jewell has supplied a custom boom trailer with each machine.

According to Jewell, the initial tasks that will confront the machines will be the demolition of "the canyons", which are heavily reinforced concrete structures that were designed to speed the transport of spent nuclear fuel rods.