The rewards of rental 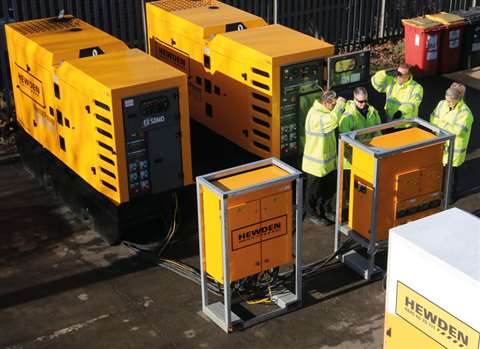 It’s no secret that contractors operate within tight margins, and renting rather than owning equipment can help drive operational efficiencies, allowing them to punch above their weight when bidding for new work.

Renting equipment frees up business capital and avoids asset depreciation. It offers contractors access to the right equipment as and when needed, and minimises maintenance and repair costs.

It also allows contractors to gain access to a wider range of state-of-the-art eco-efficient equipment through the rental model, and they can bid on jobs which require equipment they do not have in their own fleets.

In addition, it helps companies to reach sustainability goals by sharing equipment and lessening emissions.

This year’s International Rental News (IRN) ranking of European rental companies by rental revenues (based on revenues for 2015), showed that the 50 largest companies generated total European revenues of €11 billion – up 3.8% year-on-year.

Meanwhile, the European Rental Association (ERA) has forecast 1% overall growth in total rental volumes in Europe for 2016. It said total rental turnover in the EU28 totalled €23.1 billion in 2014, and increased an estimated 1.4% in 2015.

There have been some interesting acquisitions in the rental market, too. UK rental company Hewden acquired the rental arm of hybrid generator manufacturer Firefly.

Hewden said the deal was part of its commitment to providing sustainable rental solutions, and would ensure that the company had “the most comprehensive range of hybrid generators in the UK”. It added that a range of equipment would be incorporated into its product portfolio as part of the acquisition, including generators, hybrid units, solar panels, distribution units, cables and lighting solutions.

Hewden CEO Adrian Murphy said, “Sustainability is no longer a nice to have, but rather a fundamental part of how businesses should run. Hewden is committed to providing the most sustainable solutions possible from the products we hire to the places we operate.”

The rental model is growing in Europe, and manufacturers have responded by launching new equipment that is specifically targeted at rental companies – the kind of robust, reliable and environmentally-sensitive machinery these companies are looking to invest in when improving their fleets.

The European Rental Awards (which are jointly organised by IRN and the ERA) took place on 8 June this year in Stockholm, Sweden, and included a Rental Product of the Year Award for a product launched during 2015.

The judges gave a highly commended award to Wacker Neuson for its WL20e electrically-driven wheeled loader, and praised the manufacturer for having listened carefully to what the market was requesting.

Aimed at indoor applications, the WL20e can be put to use in greenhouses, tunnels, parking garages and other similar environments, producing no emissions and less noise than traditionally-powered machines. The loader also boasts ease of maintenance and lower maintenance costs – also important features for rental companies.

But the winner of this year’s European Rental Award for Rental Product of the Year was manufacturer EL & Site for its MBerg LED site light.

The judges praised the fact that the light required almost zero maintenance, and can be used in tough conditions. In fact it is suitable for use in a wide range of environments.

They said the MBerg LED site light’s low voltage and excellent heat distribution meant it was safe to use, and its high energy efficiency reduces the CO2 footprint, making it a green choice.

For rental companies, the MBerg LED site light offers the additional benefit of being available in all colours, allowing models to be personalised according to the needs of the customer.

Other manufacturers tailoring equipment for the rental sector include JCB, which developed the innovative 10 tonne operating weight Hydradig compact wheeled excavator. Hydradig is described as a digging, lifting, loading and tool-carrying machine for urban construction, highway maintenance and municipal operations.

As well as boasting a 360° view from the cab, the Hydradig can be serviced from ground level. The company said it wanted to maximise the safety of operators when servicing the machine – a key concern for rental buyers.

Meanwhile, Atlas Copco has launched the 8 Series range of 10 new air compressors, which are also well-suited to the rental market. The company said that all models in the 8 Series range fell below the 750kg limit and therefore did not required a special driving licence to tow.

Elsewhere, there is a new pump on the market from SPP in the form of the E Series autoprime pump.

SPP said that designed for tough dewatering, sewer over pumping and bypass applications, the E Series came with an optional single vane open impeller for handling raw sewage containing stringy/fibrous solids and semi solids up to 100mm in diameter.

It was also developed to be portable and lightweight, featuring a compact manoeuvrable design to allow models to be trailer transported and easily shipped – key considerations for rental buyers. SPP said the company had also worked hard to reduce the number of components in the latest pump, as well as simplifying servicing and maintenance access.

And the latest launch from UK pump manufacturer and rental company Selwood – the S150M – is a new medium-head pump suitable for multiple uses including sewage and sewer bypass and over-pumping, waste and wastewater applications, long distance water transfer and dewatering for sites and quarries.

Featuring Selwood’s Selfprime automatic self-priming technology, the manufacturer said the new pump would be available through its distribution network for sale and rental around the world. Europe’s rental houses invest in a huge range of construction equipment, but another key category is access equipment.

The report said Spain and Italy were chalking up the highest growth and were well beyond the recession with growth at or above 5% in 2015. This shows considerable progress compared to previous years when revenue declines were the norm. Sweden and Germany remain growth markets with continuous positive growth at 5%. In comparison, the UK and Norway, traditionally dynamic markets, are showing signs of slower growth.

New access equipment on the market includes the world’s biggest articulated boom, which was introduced by manufacturer JLG in the form of the 1500AJP. Its features include an up-and-over height of 18.3m, a working outreach of 23.5m and platform capacity of 270kg unrestricted and 450kg available through a vast majority of the working envelope.

The 1500AJP, which will be available for shipment in early 2017, also offers a standard 2.4m jib that raises and lowers 135° to provide additional reach and up-and-over capability.

Europe’s rental companies invest billions in new equipment to refresh and expand their fleets each year.

It is no surprise that manufacturers are increasingly tailoring new launches specifically for this sector.

In fact, the ERA has said that European rental companies are more aggressive than ever in trying to offer new products and services, as they diversify away from core construction markets into new sectors, including industrial and events.