The safe use of mobile cranes 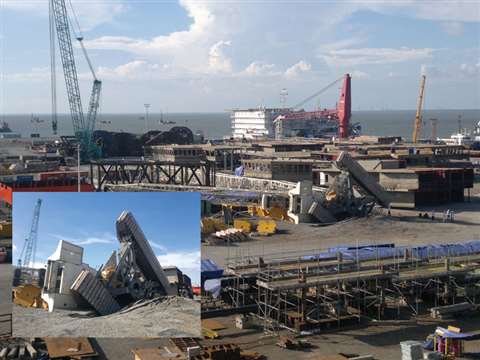 Following many crane accidents and prior to their detailed investigation, the crane, or the crane manufacturer, is very often claimed to be the reason behind the accident.

“During my 10 years in the United States, working in the mining shovel and mobile crane industry, I often saw, following an accident, that the attorneys for the crane owners would claim ‘unsafe design’, a phrase all manufacturers probably hate and fear,” Søren Jansen says. “You have all seen the result of these two words: That is when a manufacturer has to recall, not only the piece of equipment in question and fix that single unit, no, they have to recall all similar pieces of equipment or machines worldwide and fix them.”

Having seen broken lattice and telescopic booms, and broken winches, however, these accidents are caused by different kinds of shortcomings from the crane owner and, or, the operator and, unfortunately, are all too often caused by intentional misuse, Meissner says.

Jansen adds, “Having been involved in the investigation of way too many crane accidents during my career in cranes, as the CEO of a large crane rental company, or as an insurance investigator, each and every one of all these crane accidents were caused by shortcomings – shortcomings of many different kinds, ranging from mistakes to wilful acts – shortcomings amongst one or more of the people involved in the crane assignment, that ended up as a mobile crane accident. So my conclusion, and again based on my own personal experience, is that the cranes are safe to use. The cranes themselves don’t cause accidents, the accidents are mostly caused by the people surrounding and using the cranes.”

It is time to shift the focus from technical issues to behavioural issues when talking about root causes of crane accidents. Health and safety executives examining a crane in an attempt to find the root cause for a specific accident should take a look at the people surrounding the crane. Manufacturers can forever continue to add new safety features to their cranes but owners and operators often find a way in which they can disable a safety feature if it is standing in the way of executing a job.

A crane is a tool to be used for a wide range of jobs. The more complex systems become, however, the less reliable they tend to be. Adding safety features covering even unlikely scenarios does add complexity. Here we are speaking about technical systems which are used under really tough conditions, for example, wide temperature ranges from -40 to +60 degrees Celsius, in totally dry or very humid environments. The complexity in crane configuration, crane application and environmental conditions, makes it difficult to establish safety devices for all situations.

Overloading cranes
All new cranes delivered in Europe after 1 May 2010 have had to be equipped with a new set up for the load moment indicator (LMI) to prevent deliberate overriding. For many years it was a bad habit among crane operators and crane supervisors to deliberately disable the LMI. Some operators had the LMI constantly disabled, while others did it routinely when they came to the limit of the load chart; a situation that proper planning could have prevented.

Since the introduction of the new regulations, customers started to buy cranes one size bigger than before. So far no accidents with tipped cranes or broken booms have been observed for cranes equipped with LMI systems fulfilling EN13000:2010 – this is an observation shared not only by all manufacturers in FEM, but also by the HSE representatives.

Outside influences
Poor ground conditions, where the ground is incapable of handling the load from the outriggers or from the crawlers, is another factor causing crane accidents. Everyone knows why it goes wrong: the site for the setup of the crane wasn’t carefully examined for its load bearing capabilities and people didn’t take the time to find out what was below the surface, for example, pipes and sewer systems. Other factors include a lack of additional mats under the outrigger pads and the crane being set up too close to a slope etc.

“It can be very difficult to establish the correct load bearing capabilities of any given surface,” Jansen says. “For example, around 10 years ago we were working on a site when the ground under the cranes’ outriggers gave in and the crane toppled over. We had been on the same site all through the winter, working with bigger cranes, but a void (caused by vibrations from hydraulic piling hammers) had developed one metre below the surface. The verdict from the government’s health and safety inspector was clear: It was our responsibility, at all times, to have full information about the ground conditions, even if we had to go through expensive ground examinations prior to hoisting and during the duration of the job.

“As a result, we implemented a large number of countermeasures to prevent a situation like this from ever happening again. The first measure was the permanent use of additional mats, regardless of the ground. We also obtained information about the most common soils found in Denmark and, as a result, ground bearing capabilities became an integrated part of the customer order.”

So the root cause for these types of crane accidents are due to insufficient, or no examination or knowledge, of the ground and its load bearing capabilities. As a result, a lift should never be carried out until full knowledge about the ground and its load bearing capabilities has been obtained. Lifts should also never be performed without using additional and sufficient mats under the outrigger pads of the crane.

Ground pressure
People might have the impression that the area covered by a crawler crane distributes crane weight and the load on the hook evenly. The way that the load is distributed, however, strongly depends on the position of the centre of gravity in relation to the crawler tracks (see Figure 1). Adequate load distribution under crawlers by timbers or mats is required as well.

Crane accidents also happen during the erection of wind turbines. Wind speeds, or more accurately, wind gusts, are an issue that should be clear to everyone today. This knowledge is in the FEM guidance paper 5.016 called Guideline Safety Issues in Wind Turbine Installation and Transportation. The guidance is taken over into EN13000 as mandatory content for instruction manuals. The key messages are simple: get information on the weight, the sail area and the shape factor, to evaluate whether the relation of load and sail area falls into the assumptions taken when the load chart was calculated, or reduce the value of the permissible wind speed for the lift. This important information is needed before lifting light weight loads with large sail areas.

The reason behind most turbine erection accidents is insufficient planning and/or a lack of knowledge, especially when lifting rotor assemblies. There have also been a lot of accidents when semi-assembled cranes are moved from one erection site to the next. Cranes can topple while driving because of an insufficient load bearing capability of the road. Most, or at least many, roads leading to turbine erection sites are designed for an axle load of 16 tonnes but, when a large crane is moved in the semi-assembled configuration, axle pressure can be well beyond 25 tonnes.

Many accidents happen during routine jobs and, more often than not, no planning is done prior to the crane arriving on the site. The operator has done similar jobs over and over again, and it is here where we have the majority of crane accidents. We very seldom see accidents happening in well planned jobs.

Precise details
Planning is not always easy and, especially during demolition jobs, it can be extremely difficult to calculate the correct weight of the load that you will end up with once it’s cut loose. Careful planning is needed prior to each and every job and all knowledge from prior accidents or near misses should also be included. Planning is important, and failing to plan is planning for failure. The whole process should be what is called a

Do according to plan

Check whether the team is working as planned

Act if the assumptions of the plan are not fulfilled

Having a “plan A” might not be enough. In Figure 2 the load could not be slewed into position as planned due to a lamp post, so the team decided to turn in the other direction with the load at a smaller radius. As a result, the lift required that the load be travelled with the crawlers but, unfortunately, due to a smaller load radius, another momentum was acting on the boom system. As a result, the super lift traverse was now resting on the ground and pulling over the crane’s boom system as the crane started travelling. This resulted in a fatal accident.

Maintenance
Accidents aren’t always caused by wrongdoing during the erection or dismantling process of a crane. They can also be caused by lack of maintenance and poor repair. Accidents can happen when cracks in booms have been allowed to develop due to a lack of inspections and cracks appear where winches broke down due to inadequate inspection and maintenance. A crane should not go into operation unless it has been properly inspected, maintained and serviced. In addition, cranes should only be assembled and disassembled by trained and experienced people. Inspections and repairs should not be carried out without the necessary background or expertise.

In the authors’ opinion, crane accidents are caused by the people using them. So focus should be shifted from technical issues to behavioural issues. It should also be made absolutely sure that prior to any lift there is a plan A and a contingency plan B to put into place immediately if something goes wrong. There is no excuse for not being properly prepared. It should be made absolutely sure that slingers, signalmen, operators and supervisors are trained properly. In addition, there should be programmes for internationally accepted certifications.

This article was produced using a presentation made at the World Crane and Transport Summit in Amsterdam, Netherlands. The full presentation is available at: www.khl-group.com/events/wcts/