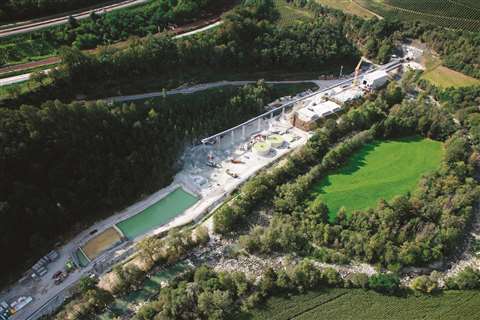 As tunnelling engineering becomes more advanced, so the possibilities increase for constructing longer, deeper and wider tunnels, and through more complex geologies.

When completed in 2026, the 64 km long Brenner Base Tunnel (BBT), running between Innsbruck in Austria and Fortezza in Italy, will be the longest underground railway tunnel in the world. At an anticipated total cost well in excess of $10 billion, it will also be one of the most expensive.

With a challenging route, below the Alps, and with a maximum cover of around 1,600 m, construction of the BBT’s two 8.1 m diameter tubes, running 70 m apart, is quite simply an immense engineering feat.

Before the development of advanced tunnel boring machines (TBMs), however, it would have been a far more hazardous and time-consuming undertaking.

In considering the many different aspects of constructing the tunnel, it was noted that the character of the rock in a mountainous tunnel would be hard to accurately predict. It was also suggested that high water pressure could be encountered. 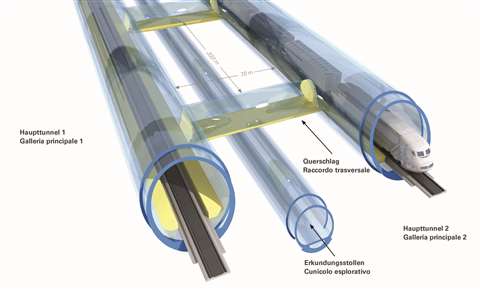 In cases such as this, TBMs have a significant advantage, in that they can undertake multiple operations simultaneously, including advancing, ground support and muck excavation.

Modern TBMs also have the capacity to extrude lining for the tunnel as they advance, as well as conditioning the material ahead by injecting water, bentonite or foam ahead of the cutterhead.

Another important aspect of the BBT was that it would run through a fault zone, where the European and Adriatic tectonic plates are pressed together.

The energetic action of drilling and blasting in such conditions had to be considered, in terms of both the short- and long-term security of the tunnel.

Ultimately, while TBMs will be used for the vast majority of the BBT, the drill and blast method is still necessarily being utilised in some areas.

A number of contractors have been brought in to tackle this huge project, including Astaldi, Strabag and Salini Impregilo. 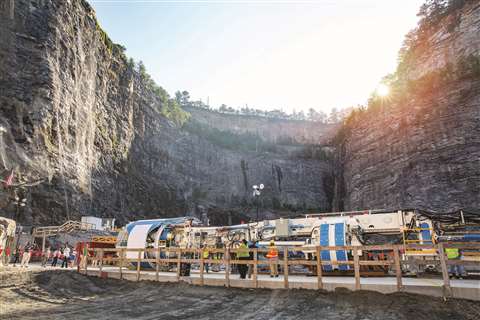 In the southern US, after identifying an emergency water supply shortage, the City of Atlanta in Georgia gave a green light to the construction of a tunnel, to draw water from the nearby Chattahoochee River.

Robbins, a tunnelling company with a 50-year history, was brought in to bore the 8 km Bellwood Tunnel.

After being walked forward some 30 m, into a starter tunnel, the Robbins Main Beam TBM is now making its way from an inactive quarry, where it must bore beneath both a water treatment works and a reservoir, before arriving at the river.

The job has been fast-tracked from the outset, with onsite set-up of the TBM, dubbed ‘Driller Mike’, taking just two-and-a-half months.

The need for immediate action was explained by Bob Huie Sr, project manager for the main contractors PC and Russell, who took on the contract as a joint venture. Huie said, “Right now, the downtown area’s emergency water supply is approximately three days. With the tunnel the supply will increase to between 30 and 90 days…this tunnel will protect the city for a very long time.”

One crucial aspect of the Robbins TBM’s progress will need close monitoring and probing; that beneath the reservoir, where it is crucial no inflows occur. 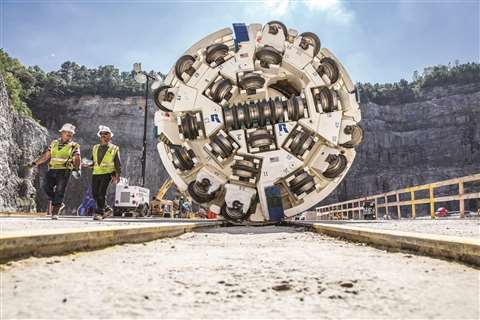 There are also changes in direction to be negotiated. Larry Weslowski, tunnelling superintendent for the PC/Russell JV, Larry Weslowski, said, “We have one curve in the first 300 m and the main 370 m radius curve is 1,800 m in. We plan to do short TBM strokes in this section – about 20 cm to 30 cm shorter than normal to get through the curves.”

Excavation is scheduled to be completed in the first quarter of 2018. Then, after final lining, the tunnel will be filled with water and the quarry site will become Atlanta’s largest reservoir and park, with the capacity to hold over 9 billion litres of water.

While the park site is a bonus for residents, the water storage capacity it will provide is critical. Nearly 1.2 million customers, including 200,000 passengers who pass through the world’s busiest airport every day.

Huie said, “If the city were to lose water supply for a day, the estimated economic impact would be at least USD $100 million per day. If you consider that this is a USD $300 million project, that seems a pretty good investment.”

A job for jumbos

Another huge European transport undertaking is the Stuttgart 21 rail project, part of a wider programme that will see a 1,500 km line connect up to 35 million people across five countries. 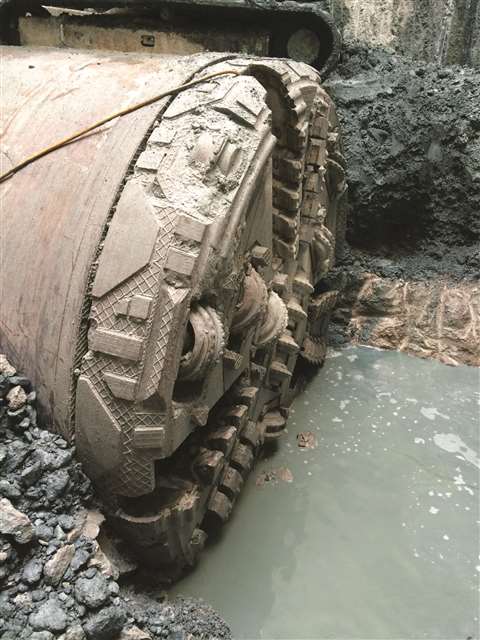 Tunnels will form a large part of the network, and the challenging topography and geology of the area has meant the new main station at Stuttgart will need to be turned 90 degrees from the one that currently stands on the site.

Around half of the 117 km of the new high-speed railway line will move through tunnels and Sandvik tunnelling jumbos have so far been chosen to work on two parts of the project.

Some of the tunnel structures have been created using mining construction methods, with rock and stone being excavated from the mountain using drilling and blasting techniques.

The roof section of the tunnel – the upper semi-circular profile – is being produced in the first stage of the process, and when complete the lower half will be excavated until the complete tunnel profile is produced.

The contractor, Avesco, utilised its fleet of 14 Sandvik Tunnelling Jumbos, but also called upon the Finnish company’s dry drilling system, when, at Feuerbach, it was found that conventional methods (ie adding flushing water during the drilling process) caused the material in the tunnel to swell.

Another complication arose at Bad Cannstatt, where the geology required the use of the pipe roof method of tunnelling.

In this case, the system involved placing 31 in the roof of the tunnel, in 15 m lengths; the tunnel is then excavated section by section, with a rotary striking motion, using the Sandvik Jumbo’s drill heads.

This method was required for around 2,000 metres of the tunnel, with 80,000 pipe elements having to be installed, and 40 experienced tunnel miners working in two shifts at six headings.

In Spain, the boring of the Bolaños tunnels between the towns of Verín and Ourense – part of the Madrid-Galicia High-Speed Line – has been completed.

FCC Construction, which undertook the project, said the works entailed the delivery of two parallel single-track tunnels, each 6.7 km long.

With an excavation diameter of 9,900mm and useful cross-section 60.27m², the tunnel was lined using precast segments 370mm thick and 1,600mm long.

The tunnel boring machine (TBM) used for the excavation was a single shield machine, manufactured by the company Herrenknecht in Germany.

Carlos Jarque, CEO of FCC Group, said, “FCC Construction has built up extensive experience and technical knowledge in transport infrastructure. This has increased the company’s competitiveness and internationalisation in the rail sector.”

FCC Construction has built over 99km of AVE (high-speed rail) in Galicia, undertaking projects such as the Vigo-Das Maceiras Tunnel with a length of 8.5km as well as the Bolaños Tunnel.

Work is also continuing in Silvaplana in Switzerland, with the objective of decentralising traffic in the city, moving it to the north-east, following the construction of a bypass tunnel.

The work is being carried out by CSC Impresa Costruzioni, a Lugano-based firm with expertise in infrastructure and underground projects. CSC will excavate the main tunnel that is 714 m long and 12 wide, with a longitudinal slope of 8.5% and a 15 m open-air section both north and south.

Along the tunnel, the firm must also construct three chambers, 40 m long and 15 wide. An excavated, 475 m long safety trench duct runs parallel to the tunnel; this will be connected to the main tunnel via five bypasses, with two further pedestrian trench ducts to be built, in case of emergencies.

Due to the limited size of these ducts, CSC needed a small machine whose pivot allows for running along curves and extreme angles. The firm decided to use the Spritz Shotcrete Telescopic CST 8.20 from Cifa.

Following the assembly of fencing or ring supports on the tunnel profiles, the spritz moves in to spray concrete reinforced with fibre.

The machine has a single fifth wheel, allowing it to rotation on its horizontal axis, plus a two-section boom with three telescopic arms and a rotating brush to smooth out the sprayed material.

Cifa and CSC engineers also collaborated on the development of a special formwork system for the tunnel lining.