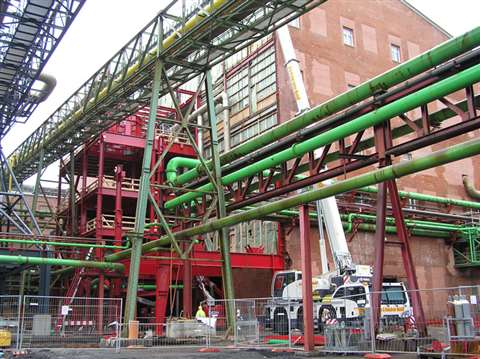 The three-axle, 55 tonne capacity Challenger 3160 all terrain crane has a 50 metre single-cylinder telescopic boom and a lifting capacity of 35.6 tonnes when working with a reach of four metres.

A lack of space at the site meant that the crane had to lift the loads under pipeline bridges while working at a long radius. Jens Hartung, crane driver, said, “We had to hoist pipelines and steel elements up to a height of 42 metres for assembly in an existing steel structure.” The approach was also a challenge, with some passages allowing for a width of 2.6 metres and a height of only 3.6 metres.

Other challenges included a high salt content in the air. In addition, due to a network of underground pipes, the maximum total crane weight for the job was limited to 40 tonnes, a spokesperson added. As a result, only half of the crane's outrigger extension and the full counterweight were used.

H & S field crew member Herbert Schug, said, “We were able to master even this task with our Challenger.”