The topside of the Brent Bravo offshore oil platform has been lifted and then loaded-in as part of the decommissioning of the Brent oilfield which is located approximately 186 km north east of the Shetland Islands.

The topside was then transported by Allseas to the coast off the north east of England where it was transferred to a purpose-built 57m x 200m barge and towed to marine decommissioning specialist Able UK’s facility at Able Seaton Port near Hartlepool.

From here UK-headquartered heavy lift and transportation specialist ALE carried out the load-in of the topside. The barge was manoeuvred in front of the quayside and ALE installed skidding equipment on the demolition pad at the port, plus several hinged link beams, extending the skid tracks from the barge to the quay for safe and stable load-in.

In total, the topside was skidded 105 metres over the course of six hours. Brent Bravo was then handed back to the client for dismantling and recycling. 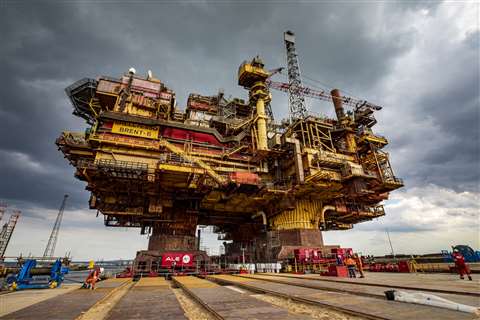