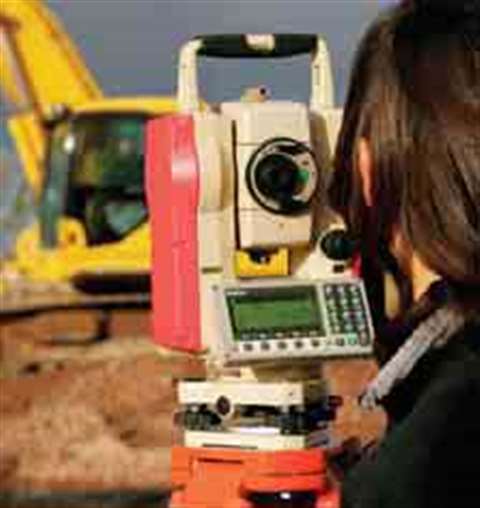 The new R-300X total station from Pentax has a higher specification than its predecessor, the R-300, but is still available at a “very competitive price”.

Mobile Phones with cameras are already old news, so the fact that topcon is now integrating a digital imaging facility into one of its total station instruments should come as little surprise, not suprising maybe, but definitely good news for those engineers who know how tired their eyes can get after days or weeks on site peering through a surveying instrument.

Topcon's GPT-7000i, launched at the Intergeo exhibition in Stuttgart last year, allows the image though the telescope to be viewed on the display screen of the instrument. The benifits of this go beyond giving the eyes a rest, it also allows surveyors to see measured points and lines superimposed onto a real view of the survey area; capture and save photos of surveyed points; view points on a steep incline that would otherwise reuire an additional eyepiece attachment; and make visual records of site fetures to assist in proessing of the survey data in the office.

Topcon says the instrument, which is based on its standard GP-7000 series of reflectorless total stations, will particularly benefit projects such as building façade measuring. “With the building façade all in view on the display screen, point identification is easy. The need for multiple visits to the site to make reconnaissance sketches and photographs is eliminated.”

The company also says that digital imaging will also come in very useful for accident investigation of environmental disaster surveys where a visual record taken at the time of the survey can have positive legal implications.

If you aren't persuaded of the benefits of having a camera in your total station – you might end up wasting valuable time taking photos of your colleagues – then you might consider another ‘world first’, a total station with integrated GPS (global positioning system).

Leica Geosystems in Switzerland asks, “What if total stations could talk to satellites?” To answer the question, the company has developed the SmartStation instrument, a modified version of its TPS 1200 total station offering integrated GPS. The GPS module can determine your position to centimetre accuracy within a few seconds at ranges of up to 50 km from a reference station. It can be retrofitted to an existing TPS 1200 and can also be used as a stand-alone GPS product.

But what are the benefits? Leica says the system allows the user to set position coordinates at the touch of a button; “Control points, traverses and resections are no longer necessary”. It also “reduces the time required for setup and orientation by up to 80%.”

The GPS system is fully integrated in the total station, with GPS data stored in the same database within the TPS, and uses the same storage media, a CompactFlash card.

There is no need for cables, external batteries or data loggers, and the GPS module is also Bluetooth enabled, which means that you can share data wirelessly with PDAs, laptop computers and mobile phones.

Leica has high hopes for the new system. Hans Hess, Leica's chief executive officer, described it as “a milestone in the history of surveying” and said it would “differentiate ourselves from the other competitors in the marketplace.”

You don't always need these kinds of additional features in a total station. Trimble, for example, has added a versatile new total station to its line up that is aimed at general and concrete contractors in commercial and residential applications. The Spectra Precision Optical TS415 “is designed for the layout of control lines, offset points, excavation lines, foundations, forms and footers, and anchor bolts.” It will also carry out alignment and measuring applications such as checking plumb, layout of arcs, and distances between points.

Trimble says the total station has also been made easy to use; “All layout functions have built-in checks and all relevant data can be stored for future reference. Dual axis compensation ensures that the TS415 remains level and accurate, even during steep sighting applications such as high rise control.”

The TS415 still comes with a selection of modern-day peripherals. For example, it will work “seamlessly” with Trimble's LM80 layout manager, which is a hand-held PC for collecting data in the field. The LM80 allows the contractor to input drawing dimensions, including complex curves, and “build a digital replica of the layout plan. The graphical plan can then be used as an aid to laying out points with the total station.”

For some buyers, of course, price can be just as important a consideration as clever advanced features. Pentax, for instance, says it has made improvements to its R-300 total station that offer improved performance and a higher specification “whilst maintaining a very competitive price”.

The new R-300X offers several benefits over its predecessor, including an additional 20000 survey points memory; set up time reduced by -40% because of a new Quick Mode; greater EDM (electronic distance measuring) accuracy; a date clock is now included on all non-prism models and the 2 and 3” (50 and 75mm) prism models; and reflectorless measurement capability of 200 m with a visible dot laser pointer.

The last six months has also seen some new launches in the laser level sector, with both Trimble and Sokkia offering new or updated products.

Sokkia's LS101 laser replaces the LS100 and is described by the manufacturer as a “compact, simple and easy to use cross line laser which projects horizontal (level) and vertical (plumb) lines together, or separately.” Applications for the laser include surface and wall layout, such as floor and wall tiles, drop ceiling instrument, wall framing and aligning wall fixtures.

Improvements over the LS100 include a wider laser line, a low battery indicator and a pendulum lock function to protect the laser during transport. The laser has two output windows, one for the laser cross and the other for the 90º plumb line reference.

Trimble's new Spectra Precision Laser HV201 model, meanwhile, is a portable, horizontal and vertical laser targeted at a wide range of general construction and interior applications. Described by Trimble as an “entry-level laser”, the HV201 has been built for construction site use – it will survive being dropped 1 m onto concrete – and is designed to be “highly intuitive” to use and is fully automatic, with self-levelling set up in both horizontal and vertical planes.

The HV201 is available in two configurations: the general construction package is for levelling, establishing vertical alignments and squaring/maintaining layout requirements on residential and small commercial construction projects, and the interior package, for installing ceiling grids, locating finished floor levels and laying out interior walls.

It doesn't have an integral digital camera, and neither will it tell you where you are in the world (to the nearest centimetre), but it will tell you if you've installed the window frames correctly.