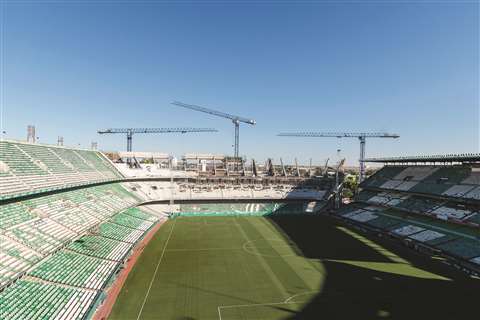 According to crane manufacturer Linden Comansa, the stands being constructed were right next to a road, which was closed to traffic for two days while the cranes were erected. This required the cranes’ assembly times to be sped up. Also, due to restricted space between the stands and the street, one of the cranes had to be erected on a 4.5 metre cross base instead of the usual 6 metre base.

The tower cranes worked at a 54 metre radius and were primarily used for lifting formwork and precast concrete pieces weighing up to 7,000 kg.

To avoid interference between the cranes, the middle of the three cranes had an under hook height of 56.3 metres, while the two cranes either side were at a height of 42.6 metres.