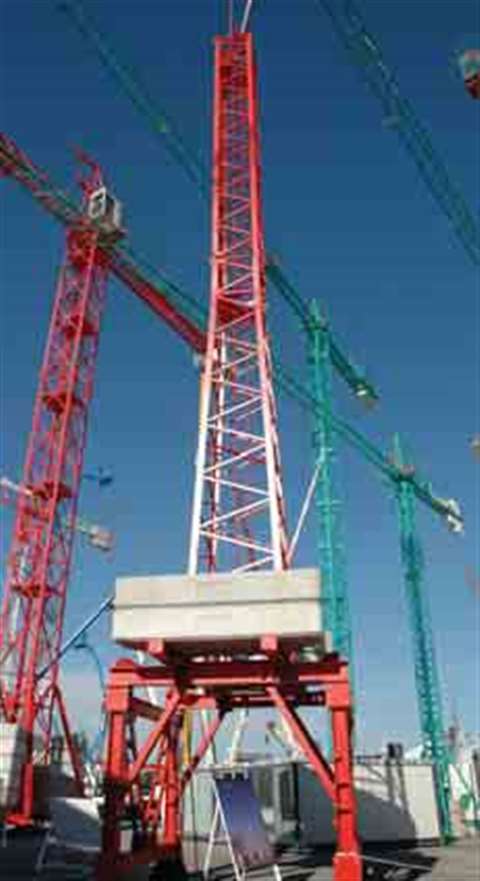 Overshadowing the mobile and crawler cranes on display at Spain's biggest construction exhibition was the large number of tower cranes, the vast majority of which are manufactured there. Sales in Spain and exports from domestic manufacturers of tower cranes have been booming for several years and despite recent forecasts to the contrary, this trend looks set to continue for the near future at least. Rental rates in Spain are falling (20 % in the last two years), however, according to Jesús Salgado at Ibergruas, which has a rental fleet of 500 units and is the Spanish distributor for Potain.

Jaso. Manufacturers launching larger cranes include Comansa, Jaso and Irmãos Tavares. In addition to building bigger, manufacturers are optimising their designs to get the most capacity, reach and tower height for the various mast sizes.

Typical in the region is a 45 to 50 m jib city class top slewing tower crane with a 1 to 1.5 tonne maximum load at jib-end, on a 1.2 or 1.6 m mast. By far the best seller for Metalbo is its M-5010, which accounts for 90 % of the Spanish manufacturer's production, making it economical to produce for a good price, explains Sebastián Naranjo from the company's commercial department. Jaso's most popular models are the J4510 and J5010, which accounted for around 40 % of the 850 unit production total last year, Rodriguez says.

The height of building projects in Spain typically varies between five and 20 storeys, Naranjo continues, explaining that owners of tower cranes are approximately 70 % rental companies and 30 % contractors. In Ibergruas’ rental fleet 50 % are 45 m jib, 1 tonne models. Jaso, which has a rental fleet of around 700 units (average age three years), has a strategy to add larger cranes to its fleet and is increasing production capacity with a new factory in Zaragoza, for larger cranes.

Also increasing production capacity with a new factory (See IC Jan 05 News, p7) is domestic manufacturer Comansa, which had three towers on show at SMOPyC. First of these was the LC-5211, a top slewing flat top model based on the LC 5013, at the crossover point between model ranges. Capacity is now 1.4 tonnes at 50 m instead of 1.3 tonnes, but the main difference is that the old 1.3 tonne maximum is now available on a jib that can be 2.5 m longer-so a total of 52.5 m is available-and still on a 1.2 by 1.2 m tower mast. This is the maximum before having to move up to the 1.6 m mast, which is 50 % more expensive, explains Comansa sales manager Juan Mari Iturrarte.

A larger Comansa on show was the 18 tonne maximum, 4 tonne at 80 m, 21 LC 550, sold to work on a dam project in the south of Spain. In addition to selling well in Spain for civil construction projects and large buildings, this is the company's best-selling model in the US, where demand for tower cranes is rising fast, Iturrarte says.

New and on display from Jaso was the company's largest model, the J600. Described by Jaso as a flat top, the J600 has a maximum 80 m jib, 20 tonne maximum, and lifts 5.1 tonnes at full radius. The prototype was shown at Bauma 2004 and the one at SMOPyC was the first production unit. Reduced transport costs is a focus of the design where, for example, the height of the jib allows it to fit in standard containers and it has a reduced height cat-head. The mast sections are in four panels, rather than monoblock, so they go flat to take up less space. As a flat top crane the jib can be erected in one piece, Rodriguez says. While the domestic market accounts for around 75 % of Jaso's total sales, easy transport is increasingly important for export.

New and on show at SMOPyC was the 40 m maximum jib 1.1 tonne tip load model M-4011, which Sebastián Naranjo claims has the lowest price in the Spanish market for this size of crane. With the maximum jib it will lift 2.5 tonnes out to 16 m.

Topping the Metalbo range is the M-6020, shown at SMOPyC, which has 2 tonne capacity (on two falls of rope) at the end of its 61 m maximum jib, a maximum free standing tower height of 66 m and two slewing motors. About 12 units a year are sold of this model, mostly in Spain and South America (Venezuela and Nicaragua), but other good markets are Germany and Romania, Naranjo says.

Naranjo explains that versatility is key to Metalbo, which offers tower sections in lengths of 3, 6, 9 and 12 m, and jib sections in 5 or 10 m lengths across the range. Metalbo is building 33 cranes a month, up significantly from 22 a month in 2004, and hopes to have raised this to 37 by the end of this year, Naranjo claims. Sales are 95 % in Spain but the company is looking to increase exports.

Concentrating on the domestic market is Spanish manufacturer Sistemas Forza with its Sáez range of bottom slewing self erectors, top slewing saddle jib towers on 1.2 masts, and a larger flat top tower on 1.85 m mast sections that lifts 1.65 tonnes at 60 m.

With a similar focus is domestic manufacturer Pingon, which promoted the Z series of 30 to 50 and 60 to 140 tonne-metre rated top slewing saddle jib towers that also have panel type mast sections instead of monoblock for easy transport.

Portuguese manufacturer Irmãos Tavares showed a new crane, the distinctive IT66f flat top. It has a maximum 66 m jib where it lifts 1 tonne, on a 1.6 x 1.6 m mast, which gives a maximum free standing height of 48 m. Also new is the IT54f, which lifts 1 tonne at the maximum 54 m jib on a 1.15 m mast. The company's best seller is the 1 tonne capacity at 36 m maximum jib IT36f, on a 1.15 m mast, which, distributor Daniel Romero says, can be transported on one truck, without the base, with 30 m of mast, full 36 m of jib and all 6 tonnes of counterweight.

Liebherr, which manufactures its city class and self erecting towers at its factory in Pamplona in the north of Spain, showed several models from its various ranges and Terex showed two Comedil tower cranes-the self-erecting CBR 32H and the flat top CTT 161-8.