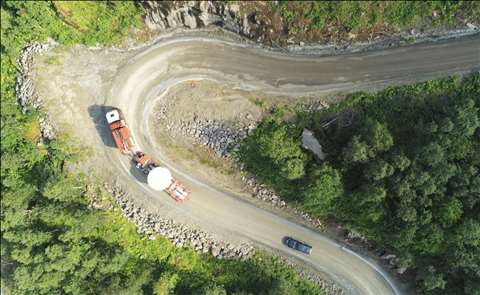 Mammoet uses TPA for the first time in Norway

Developed with trailer manufacturer Scheuerle, TPA is a 1,000 hp powered trailer system used as an alternative to self propelled modular transporter and prime movers. To improve transport safety and efficiency it was used on a project to move 23 generators and 23 turbine hubs on a particular section of the route near Narvik in the north of the country.

Safety is one of several benefits afforded by TPA. Anders Bräuner, Mammoet Denmark sales manager, commented, “Safety is vital on every project. The four kilometre section of the route to the Narvik site that Mammoet were required to complete involved climbing an 18 per cent gradient and navigating 12 to 14 hairpin bends. With each generator weighing 74 metric tonnes and each hub weighing 47, we needed to use the TPA system to maintain safety”.

TPA is a module of six axle lines, the central four of which are driven. The engine drives hydraulic pumps as part of an hydraulic power pack unit. It has twice the pulling force of a conventional prime mover, Mammoet said. It means fewer prime movers are needed and it offers a tighter turning radius.

TPA’s on board power of 1,000 hp reduces the need for prime movers