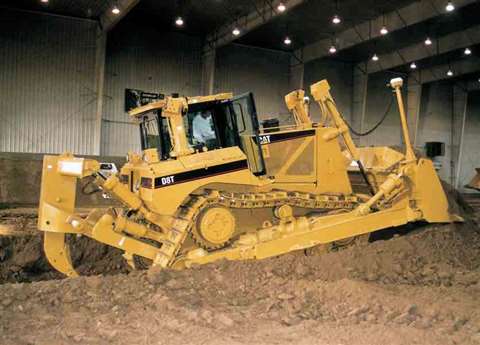 Caterpillar's new D8T gets put through its paces at the company's in-door demonstration facility in Peoria, Illinois,US.

On 24 November 2004 caterpillar celebrated the 100th anniversary of its track type dozers with the release of three new models-the D8T, D9T and D10T-at its testing facility in Peoria, Illinios, US. Richard High reports.

History was made 100 years ago with the introduction of a machine that would arguably revolutionize the world of construction, and ultimately lead to the formation of the Caterpillar Tractor Co., predecessor of Caterpillar Inc. based in Peoria, Illinois.

On November 24, 1904, Benjamin Holt first demonstrated his innovative steam tractor moving on self-laying tracks. The machine's movement inspired the photographer hired to record the event for posterity to call out “Why if that don't look just like a caterpillar”, thereby giving a name to what is perhaps one of the world's best-known brands today.

Another common feature is the company's Advanced Air Management System. This is designed to improve engine responsiveness, a more complete combustion in the cylinder and lower operating costs.

Operator comfort has been well looked after too. The new cab was described by Mr Lynch as, “not just a cab, more an integrated electronic platform”. The operator is able to monitor the Computor Aided Earthmoving System (CAES) and AccuGrade laser system, which are fitted for better productivity.

Steering, machine direction and gear selection are all clustered in a single handle for “easy, one-handed operation” with Finger Tip Control (FTC) steering in the D10T. The D8T and D9T feature a dual-twist tiller to control the differential steering system that is standard on all machines.

“We asked ourselves what we could do to make the machine more productive. Therefore we've made everything as user friendly and efficient as possible, from blade control to operator comfort, from easy maintenance to reducing downtime it's all about improving productivity.”