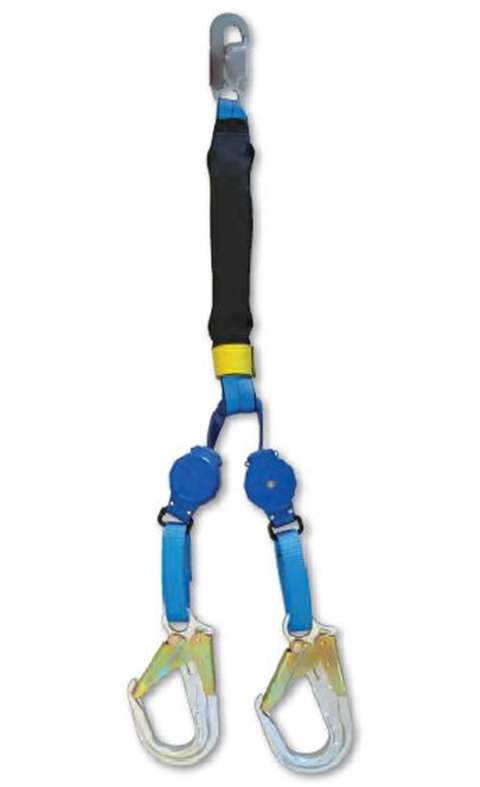 The new Tracpac self-retracting lanyard is designed to be used as a connecting device in a personal fall arrest system. It connects the user's harness to the anchorage point. Typical applications are for indoor warehouse use, for personnel using forklifts, order pickers or scaffolding applications.

"The Tracpac self-retracting lanyard allows freedom of movement in elevated areas and eliminates tripping hazards and dangerous falls normally associated with fixed length lanyards," the company said. "In case of a slip or a fall, an internal locking system immediately activates to arrest the fall. When a fall occurs, the sudden stop caused by the fall arrest system submits the human body to a high impact force - the longer the free fall distance, the higher the force."

According to Tractel, the purpose of the shock absorber is to lower the impact force experienced in a fall by dissipating the kinetic energy and controlling deceleration. The shock-absorbing device is made of specially woven webbing that elongates through tearing on its weave and stitching.

The dual arm model allows the worker to remain safely connected at all time (100 percent tie-off) while climbing or on the move.

Tractel also announced its new Adjustfor work-positioning rope lanyard device. The Adjustfor is made to connect work-positioning D-Rings on a harness to a structure. It is made with a 5/8-in. diameter polyamide rope and is 6 feet long. A self-locking mechanical rope adjuster is used to regulate the lanyard with one hand when in a work-positioning practice.

The metal components assembled on the lanyard are made of aluminum alloy and steel.

"Everything was thought of; a larger size connector was chosen to facilitate its opening when a user is wearing gloves, a protective sheath to shield the lanyard against wear by abrasion and cuts on sharp edges and a sewn termination preventing the lanyard from slipping out of the rope adjuster," the company said.

Lastly, Tractel introduced the new Travsafe Tempo III horizontal lifeline. The compact system is composed of a Kernmantle rope of half an inch, which can be adjusted from 3 to 60 feet, a Travsafe Tempo III rope adjuster with integral carabiner, one extra closed carabiner, two 6-feet endless slings and three travel O-Rings.

"The new Travsafe Tempo III horizontal lifeline system provides an uncomplicated and lightweight solution for all short-term work on structures which are difficult to access," the company said. "The system also allows simultaneous circulation and fall protection for three users up to 310 pounds each including their tools."