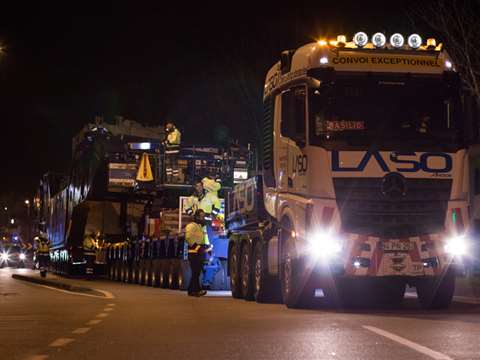 The planning of this job took about a-year-and-a-half and involved three tractors, 12 support vehicles, 30 Laso employees and about 10 police officers

Planning this transportation job, Laso said, took approximately 18 months. The job itself involved three tractors, 12 support vehicles, 30 Laso employees and about 10 police officers. The distance between the factory and port was covered in 12 hours. The company said the route was challenging and involved not only negotiating traffic signs, lamp-posts, and telegraph poles but curves, ascents, bridges, lateral slopes, intersections and roundabouts.

Laso reported that the challenges were all successfully overcome thanks, in part, to the thorough planning and feasibility study carried out by its technical department. Laso said that the completion of this job illustrates its capabilities. The company, which is celebrating its tenth anniversary this year, claimed that its cutting-edge technology and highly qualified technicians make it competitive on a global scale.