Trime launched at Bauma a new ‘electric powered motion’ lighting tower designed for applications where lights are required to be moved on large construction sites or major facilities such as airports.

The X-City Hybrid - which has batteries and an onboard engine - comes with electrically powered axles controlled by a handle, making it easy for personnel to shift the tower on site or manoeuvre for transport. 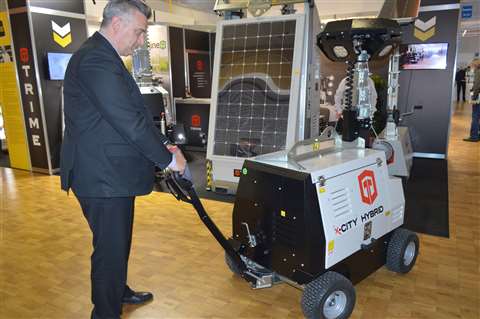 The tower has two AGM batteries which provide 18 hours operation, with a 3.5kW Yanmar engine used to recharge the batteries. A double insulation alternator means that the tower does not need to be earthed. The 3.5m hight mast is raised manually and the four LED lamps provide 1800m2 of anti-glare light.

“It’s perfect for customers working on projects like HS2, or for working at Heathrow at night”, said Paul Hay, Managing Director of Trime (UK), “You don’t need a forklift to move it on site.” It is priced around 30% less than a conventional trailerised tower.

The company reported that one unit has already been sold to a distributor in France, while others are out on trial in the UK.

Trime, which has a manufacturing base in Italy, has grown rapidly in the past three years, with revenues more than doubling between 2016 and 2018. While the UK is a big market for its lighting towers, the company is also selling significant numbers of machines to the US through its dealer FTG Equipment.