In the Northern hemisphere the signs of spring are a welcome sight following a long, hard Covid-19 winter. And in the truck crane market there are positive signs, too, with multiple new product launches – particularly towards the upper end of the lifting capacity scale.

John Lukow, vice president of South Dakota, USA-headquartered trailer and heavy equipment manufacturer Load King, observed that although boom truck orders were down in 2020, “in this downturn the part of the market that has remained is the larger tonnage machines, 40 tons or more.” Load King is a division of Custom Truck One Source – which has one of the largest boom truck fleets in the USA, with more than 200 units – so Lukow is well-placed to observe this trend.

Manufacturers are looking to satisfy this appetite for higher capacity cranes and there’s a number of new machine releases. Just this month (March 2021), for example, we exclusively report on two new HK truck cranes from Japanese crane manufacturer Tadano: the HK 4.050-1 and the HK 4.070-1, in the 50 and 70 tonne classes, respectively. 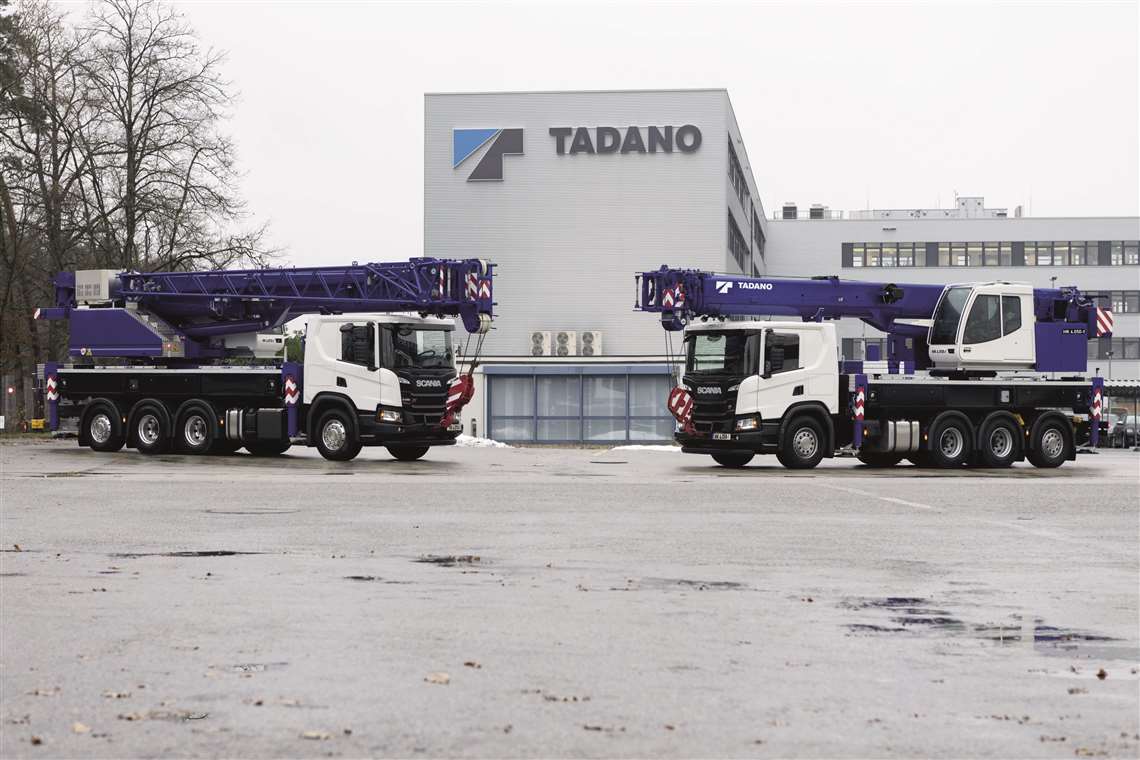 Tadano says it designed the new four-axle truck mounted cranes with a focus on manoeuvrability. Both cranes have steered front and trailing axles. The second and third axles are closer to the centre of the vehicle than standard axle configurations providing a 2 metre smaller turning radius than the crane’s predecessor models.

Tadano says the two rigid mechanical axles (axles two and three) combined with air suspension for the three rear axles provide the cranes with good tractive force on the road and stability during travel.

Both truck cranes come with H-style outriggers. These are the only Tadano truck cranes to do so. Tadano says the H-style outriggers require less space compared to swing-out ones and enable the chassis to be lifted higher. The outriggers on both models can also be positioned in an asymmetrical configuration. When being used like this the crane’s AML crane control software automatically determines its maximum lifting capacity.

“We decided to develop the new series fulfilling all the latest emissions regulations, for both the chassis and the cranes,” says Michael Klein, product marketing manager, who is overseeing the cranes’ launch, “so they come with EU Stage V emission standard engines with an exhaust gas treatment system.”

The new boom truck has a 151 foot (46 metre) five-section full-power boom mounted on a vehicle under 45 foot (13.7 metres) long. It can be fitted to several standard truck options, expanding layout configuration. The NBT60XL also has an hydraulically removeable counterweight configurable from zero to 16,000 lb (7.3 tonnes), allowing it to take on much heavier picks.

When equipped with the National Truck Crane (NTC) package, it has four outrigger positions, an optional two-camera system for increased jobsite visibility and a fully integrated wireless wind speed indicator. “To get even more capacity and maintain overall agility, these ‘truck crane’-style counterweights offer many combinations allowing operators to take what is needed for the job and still meet any roading regulations,” says Bob Ritter, boom truck product manager. “The NBT60XL is set to take on all competitors in the 60 ton market. Whether it be a boom truck or truck crane, this machine features the best combination of boom length and load chart capacity with a sturdy operator’s feel and plenty of comfortable manoeuvrability to get to and from any jobsite. Additionally, its commercial truck carrier adds a level of comfort, customisation and travel speed not yet available to the truck crane market.”

A 36 foot (11 metre) offsetable lattice jib can be specified. This increases the crane’s reach to 196 feet (60 metres). It also has an hydraulically tilting operator cab with heated seat and bluetooth/AM/FM stereo and speakers.

“What’s really valuable here in North America is the ability to travel with, with all of the counterweight, if needed,” adds Ritter. “Lower acquisition costs and a more comfortable ride mean there’s a lot of advantages to the to the boom truck concept.”

Remaining in the USA, Bridgeview, Illinois-based Manitex International has launched the new TC65159 truck mounted crane. It has a 65 US ton (60 tonne) base rating and a five-section 159 foot (48 metre), full power, proportionally extended boom with a 168 foot (51 metre) tip height and 206 foot (63 metre) tip height when equipped with a one-piece, 38 foot offset lattice jib.

The longer boom is designed to provide stiffness in long reach applications making it well-suited to steel erectors and other duty cycle applications where production work is key, the company said. The TC65159 will offer asymmetrical outrigger positioning, and increased ground penetration allowing the operator flexibility setting up in confined spaces and uneven terrain.

“We continue to develop higher capacity cranes that are well-suited for a wide variety of applications and offer the overall benefits of a commercial chassis,” comments Jeff Long, general manager at Manitex.

This trend towards higher capacity in the truck mounted crane and boom crane markets has seen them encroach onto the traditional truck crane sector. “The lines are blurred,” Lukow says. “The heritage of the boom truck was that they were small, cost-effective cranes that could move rapidly down the road. But the 50 tons capacity and up is a different kind of class of cranes with different controls.” Larger capacity boom trucks need electric over hydraulics, load ratings at 10 feet, formed booms, longer booms, remote operation, operating cabs and bigger features that you get from bigger cranes, he said.

News of another new truck crane, however, perhaps offers a glimpse of an alternative future for the truck crane sector. Although it may only have a capacity of 25 tonnes, the ZTC250N-EV (first reported in ICST May 2020) from Chinese crane manufacturer Zoomlion is a fully battery-electric truck crane that comes packed with cutting edge technology.

The manufacturer claims it can be 80 percent charged from flat in just one hour and that the crane functions can be used while charging, assuming availability of sufficient site power. The crane’s superstructure batteries double as counterweight.

Automation features heavily – offering control of the outriggers, crane setup, plus lifting and rotation in accordance with preset lifting plans. Automation even extends to driverless movement of the carrier along a predefined route. Lifting plans can be imported from a cloud and a 3D generation of lift plans can be viewed.

A laser-scanning system is promoted for obstacle avoidance, while an object recognition function allows it to lock and track target objects being hoisted. Real time monitoring is provided by onboard cameras and the crane has anti-sway control. 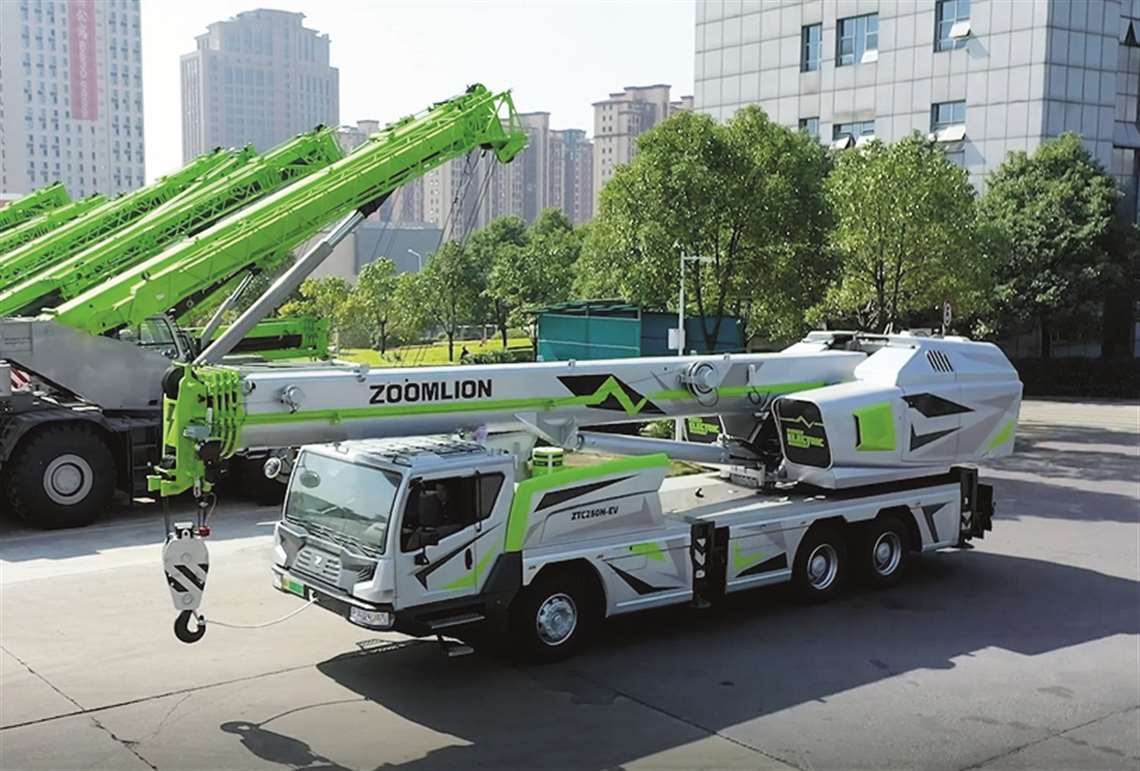 Zoomlion says that, fully charged, the carrier has a range of 230 km and on-the-road electricity consumption is 150 kWh per 100 km. The crane has up to 1,500 Nm of torque which Zoomlion says means it can tackle slopes of 50 percent gradient.

It will be interesting to revisit this sector in 12 months to see how popular this tech-heavy crane has been and if any other truck crane manufacturers follow in a similar direction.

The AK 52 has an extension length of 52 metres and a reach of 45 metres
Oberhausen, Germany-based roofing specialist Grefer Dach used a Böcker AK 52 truck-mounted crane to renovate the slate roof of a historic town hall in Bochum, western Germany. The crane was used to lift boxes with slates and copper dormer cladding onto the roof of the seven-storey building. The boxes weighed approximately 1.2 tonnes each. The eaves of the roof were approximately 23 metres high, the rafters 14 metres long, and the roof’s ridge was around 35 metres high. 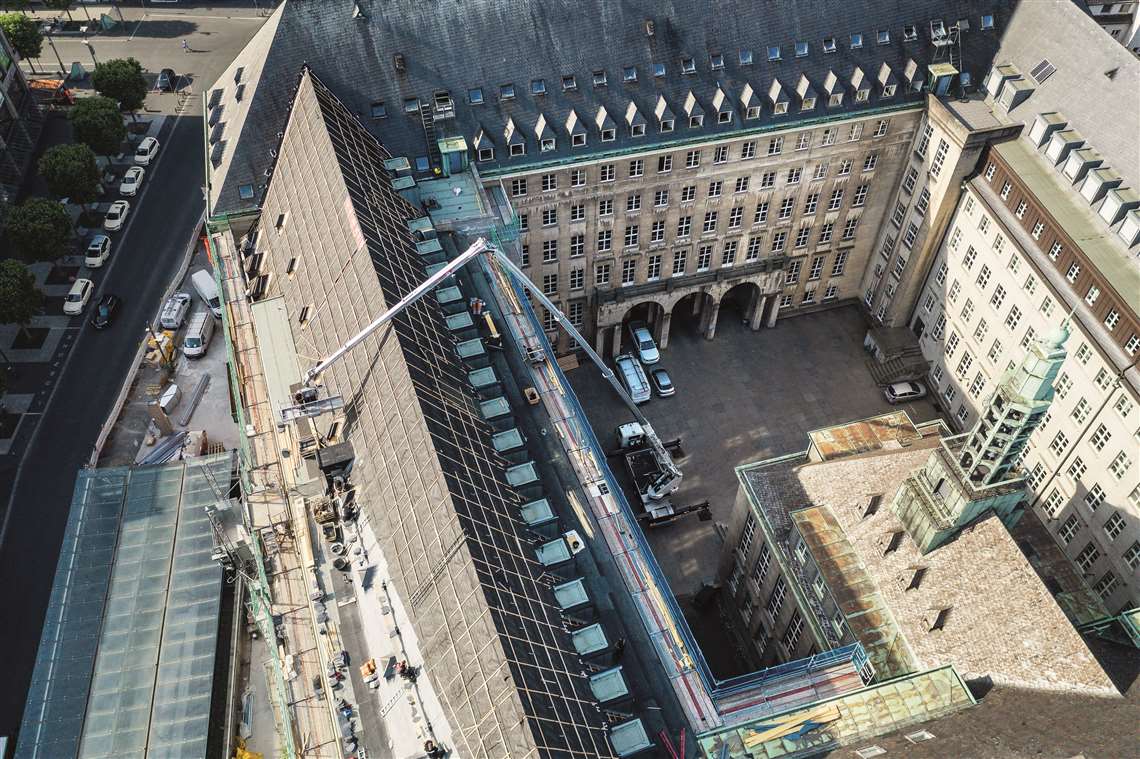 The AK 52 has a maximum capacity of 12 tonnes, an extension length of 52 metres (this can be increased to 55 metres) and a reach of up to 45 metres. It can lift three tonnes to a height of 31 metres with a reach of 17 metres. The telescopic mast system is made of a combination of steel and aluminium alloys and offers 360 degree pivoting. Its 14 metre jib is fully hydraulically driven via remote colour control and holds up to one tonne even in a total extended horizontal position.

The AK 52 lifted the materials from the building’s inner courtyard. The AK 52 is well-suited for use in use in tight spaces, says Böcker. Even when the maximum reach is attained, the slewing radius is only 2.2 metres, and the turret protrudes no more than 0.9 metres beyond the frame of the carrier vehicle, as the crane does not require any extendable counterweights, it illustrates. Variable outrigger positions and high ground clearance are designed to facilitate on-site set-up. Sensors on each support are designed to ensure that the load on the ground is distributed optimally and that the axles retract automatically during levelling. The AK 52 has rear-axle steering designed for manoeuvrability and drivability. 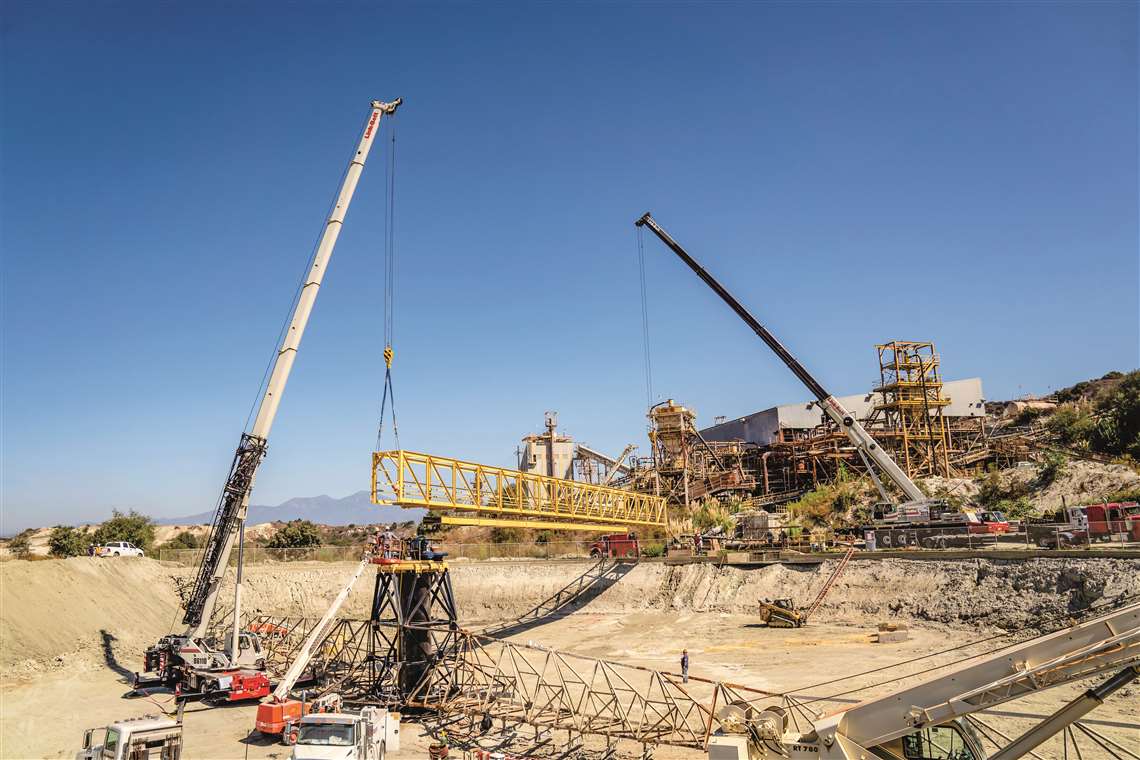 “It was a unique setup,” said crane operator, Mike Norris, who ran the HTC-86110. “A temporary ramp was built for us to get the HTC-86110 down into the pond. Then we were set up along with the ATC-3275 so we could pick the bridge and set it into place.”

Reach for both cranes was important for positioning the bridge. “The ATC-3275 had to pick about 15 feet [4.5 metres] further than the HTC-86110, so we had it on higher ground on the bank,” said Norris.

Over Projects and Platetrade transport items Heineken brewery in Brazil
18 shipments of brewery component carried out over a five-month period
Loading...
Latest News 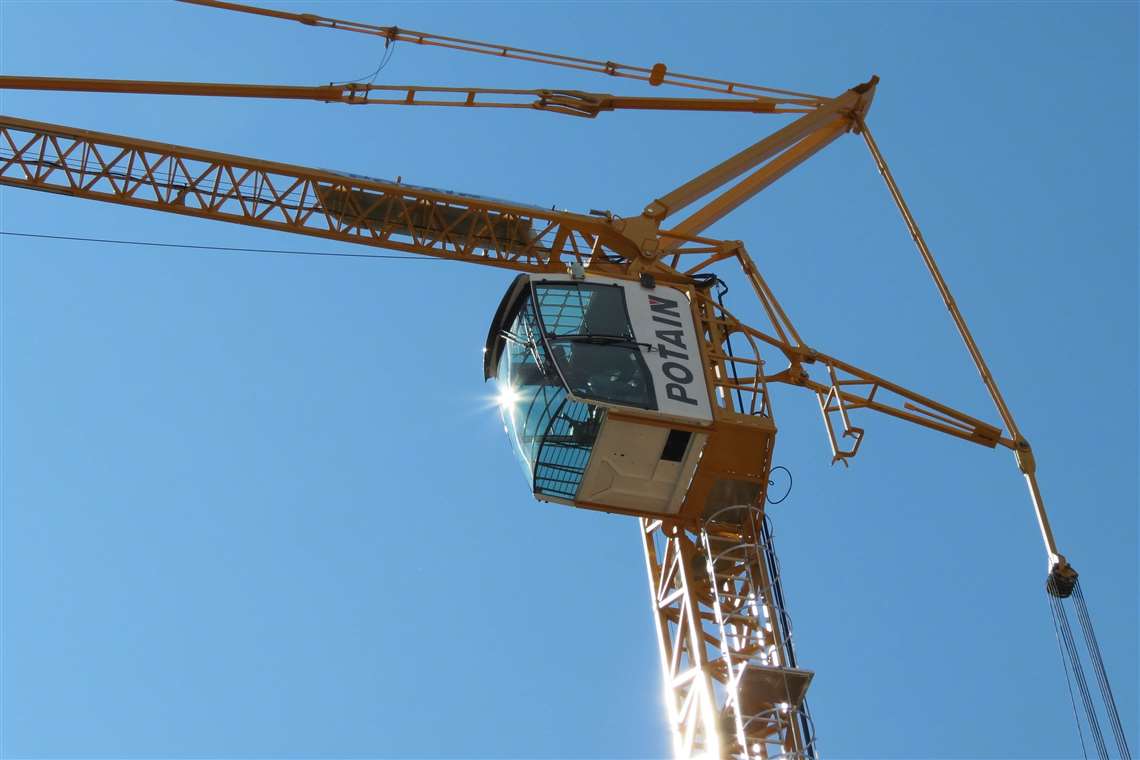 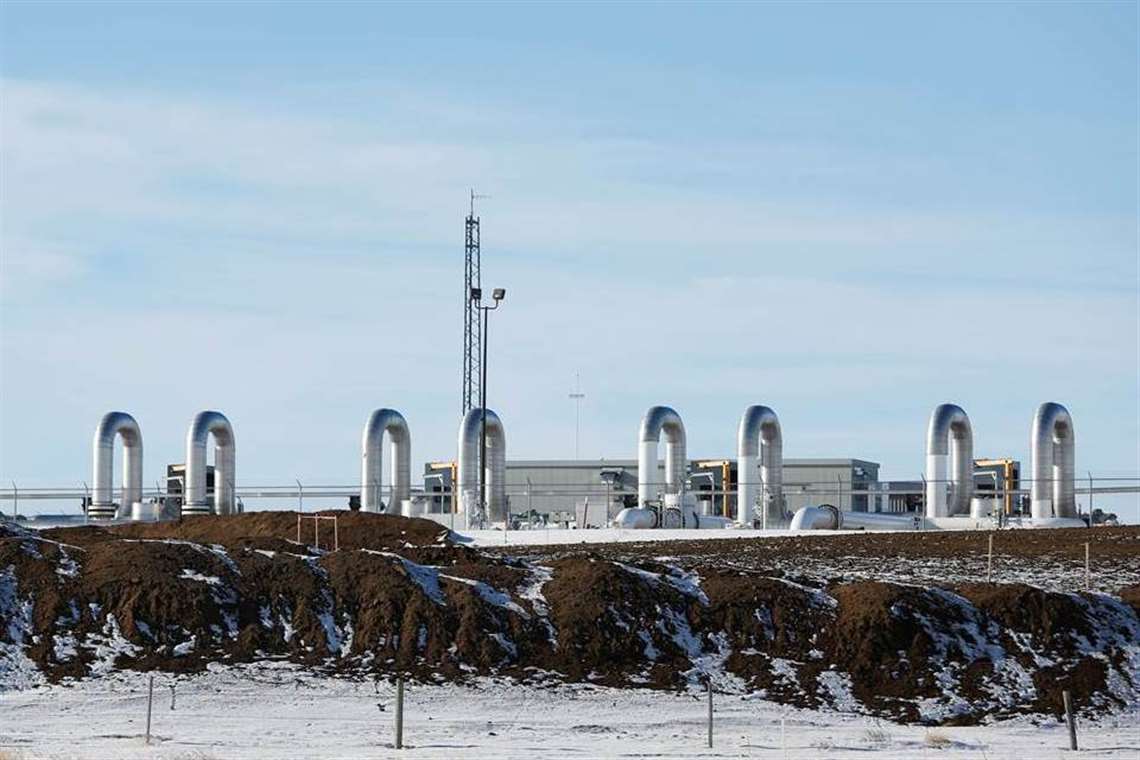