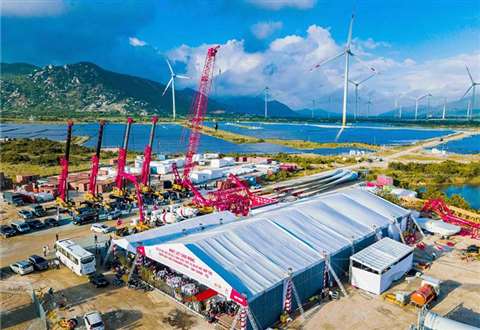 On 7 November Sany handed over three 800 tonne capacity lattice boom crawler cranes at Trung Nam Wind Power Plant in Thuan Bac district, Ninh Thuan Province, Vietnam. Trungnam Group is using the cranes on a renewable energy project. The delivery was the first part of a contract to supply equipment worth US$ 67 million signed on 7 May 2020.

Another 20 pieces of equipment were also handed over as part of the first delivery. The rest of the units will be delivered in December this year, Trungnam said.

At the time of the handover of the first 23 units, the parties also held a signing ceremony for the second equipment supply contract and signed a strategic co-operation agreement at Trung Nam Wind Power Plant. This was for an additional batch of equipment worth more than $30 million, making the total of the two orders more than $100 million, Trungnam said.

All together there will be nearly 80 crawler and truck cranes, in lifting capacities between 25 and 1,250 tonnes. Of those there are 18 heavy lift crawler cranes with load capacities from 800 to 1,250 tonnes.

Trung Nam Construction Investment Joint Stock Company (Trungnam Group) was established in 2004. It is now a group of 15 companies with more than 1,500 people. Operating areas include construction, energy, infrastructure and real estate.