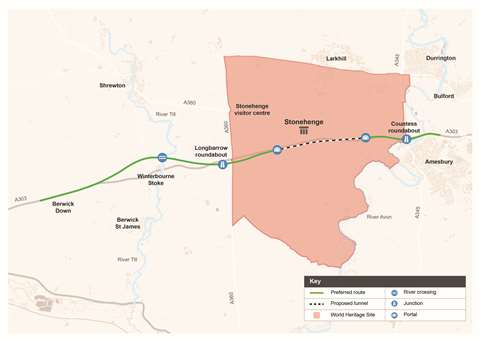 The UK government has released plans to remodel the A303 road near the World Heritage site Stonehenge, UK.

The £1.6 billion (€1.82 billion) upgrade between Amesbury and Berwick Down will include a 1.8 mile-long tunnel running underneath the 2,600ha prehistoric Stonehenge site, 50m further from the standing stones than the current road that bisects the grounds on which they stand.

Aside from removing traffic blight on local communities, the UK government’s transport secretary Chris Grayling said, “The scheme will also support 120,000 extra jobs and 100,000 new homes across the region.”

Highways England was said to have modified the plans in response to feedback from local communities, heritage groups, archaeologists, historians and engineers. The position of one of the tunnel entrances was moved to avoid conflicting with solstice alignment.