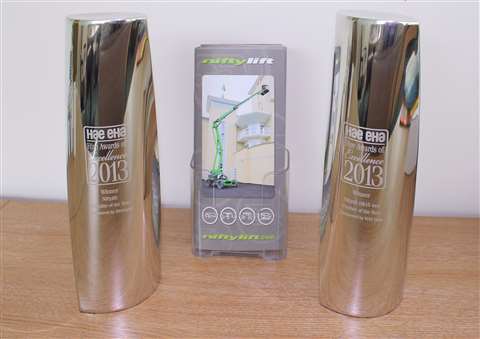 Niftylift has continued its winning streak by picking up the Product of the Year and Supplier of the Year awards at the Hire Association Europe (HAE) Hire Awards of Excellence 2013.

These latest awards followed two Queen’s Awards for Enterprise presented to the UK-based manufacturer last week. They were for International Trade and Innovation for its HR17 Hybrid 4x4.

The HAE awards ceremony, which took place at The Savoy hotel in London, UK, acknowledges the success of European rental companies and suppliers, as well as individuals who have helped better standards in the rental industry.

Product of the Year was awarded to Niftylift’s new HR15 4x4, a super-low-weight 15 m access platform with a 4 WD self propelled base and a Tier 4 Diesel engine. The HR15 4x4 was selected by an independent judging panel made up of hire industry experts and senior members of relevant trade bodies and associations.

Tim Ward, UK sales manager for Niftylift commented, “The new HR15 4x4 is the result of years of hire industry experience poured into a world-class product development process. Whether from the point of view of a machine operator or a hire company, the HR15 4x4 delivers performance, economy, and most importantly safety and we are very excited that it’s been recognised as Product of the Year.”

Uniquely, Supplier of the Year is chosen purely on votes from members of the rental industry. Simon Maher, Niftylift marketing manager said, “We are thrilled to have received these awards and are particularly proud of Supplier of the Year as it recognises the huge effort we put into the entire spectrum of our business. Being voted for by our customers makes it all the more significant to us and provides a real benchmark with which to measure our future efforts.”

Mr Maher added, “Niftylift would like to thank the HAE, with special mention to Graham Arundell and Stephen Dorricott, for hosting a thoroughly enjoyable event, the independent judging panel for their inspired vision and all those who took the time to vote for Niftylift as Supplier of the Year, we really appreciate it – thank you all.”