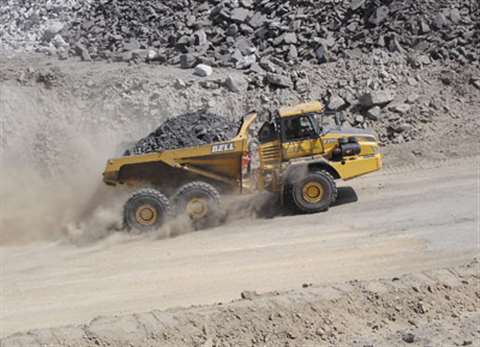 Bell will be adding two new trucks to its range at Intermat. At the lower end of the scale is the B25DN, a narrow bodied version of the standard 25 ton (22,7 tonne) B25D. According to Bell France is one of the key markets for such a machine, where there are a lot of quarry sites built around on-highway trucks. The new B25DN it says has the ability to fit under smaller silos, while offering the safety and off-road driving advantages of an articulated dump truck (ADT).

Further up the scale is the B45D, a 45 ton (40,9 tonne) capacity machine added to fill the gap between the B40D and B50D ADTs. Based on the range-topping B50D, the new truck has a 350 kW engine, as opposed to its bigger brother's 390 kW unit, but retains the many of the larger machine's well-proven components.

Bell is also planning to upgrade its larger trucks to its new Mark VI specification in the first part of this year. Innovations include a hydraulic suspension ‘comfort ride' option and a new cab layout featuring a keyless start system and new body tipping control.