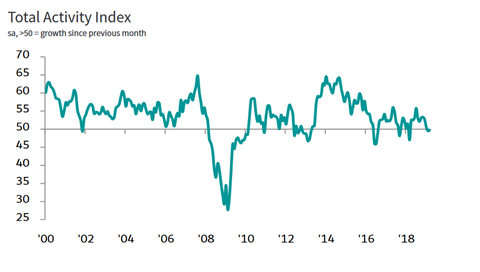 Commercial construction was the worst performing area during the latest survey period for March, with business activity dropping to the greatest extent since March 2018.

There were widespread reports that Brexit (the UK’s decision to leave the EU) uncertainty and concerns about the domestic economic outlook had led to risk aversion among clients.

Civil engineering activity also fell in March, although the rate of decline was reported to have eased since February.

On the other hand, residential building bucked the downward trend seen across the wider construction sector in March. Though it was at its strongest level seen so far in 2019, the latest upturn in housing activity was only modest.

Adjusted for seasonal influences, the headline IHS Markit/CIPS UK Construction Total Activity Index posted 49.7, up fractionally from 49.5 in February but still below the 50.0 no-change threshold.

What these figures essentially mean is that there has been a sustained decline in total construction activity. The decline is the first back-to-back fall in output levels since August 2016, although the rate of decline remained only marginal in March.

New business and employment numbers increased only slightly at the end of the first quarter, reflecting subdued underlying demand and delays to decision-making among clients.

Joe Hayes, an economist at IHS Markit, said, “Fears that the recent weakness of the UK construction sector may not be just a blip, but a sustained soft patch, were further fuelled by latest data. Amid subdued inflows of new work, a first back-to-back decline in output since August 2016 was recorded.

“Nevertheless, UK construction businesses ramped up their purchases of materials and other inputs, reflecting efforts to build safety stocks ahead of any potential Brexit-related disruptions. As such, supply chain constraints persisted, and average input lead times lengthened once again.”

Mark Robinson, CEO of public sector organisation Scape Group, said, “Although business optimism remains weak as Brexit jitters fail to subside, it is promising to see residential work jump up as housebuilders press ahead amidst bleak uncertainty, in the hope that a softer Brexit materialises.”

Referring to snow disruptions last year, Phil Harris, director at BLP Insurance, said, “After slipping into contraction last month, it was unsurprising to see little positive momentum in today’s PMI figures. The ‘Beast from the East’ ravaged the sector last March, but a year on and the market has been snowed in by Brexit.”

Brendan Sharkey, head of construction and real estate at MHA MacIntyre Hudson, said, “The general feeling is of an industry ticking along, with enough business to get by but with no immediate prospects of growth.”

He said that the collapse of Interserve did not threaten the industry in the same way as Carillion’s demise. However, he made the point that there was not much evidence to suggest other players are moving away from the low-profit high-turnover model, which lies behind Interserve’s fall.