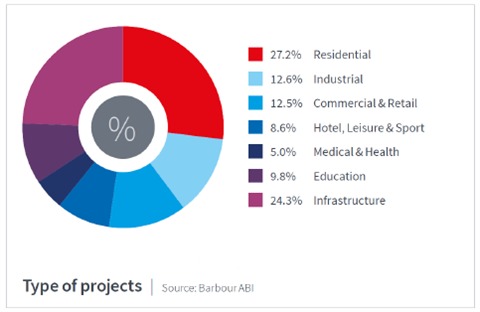 The total value of construction contracts awarded in the UK in July was more than double that of the previous month, according to a new report.

The figures stand at odds with the general UK economy, which is now in recession as a result of the Covid-19 pandemic.

According to the report, every sector within the UK industry saw a minimum 33% growth in July, compared with the previous month, with some sectors seeing growth of up to 98%.

Infrastructure leapt up 75.4%, while residential construction grew by 65.9% and the value of education construction contracts rose by 43.5%.

From a regional perspective, London led the way, taking an 18.5% share of all UK contracts, with Scotland hosting 17.1% and the South East region of England seeing 12.8% of contracts.

Tom Hall, chief economist with Barbour ABI and AMA Research, said, “While the economy entered a recession, the construction industry has seen significant increases in activity over the last two months. This could potentially be due to the restarting of activity that had stalled in previous months. A strong planning pipeline could suggest the industry will continue to strengthen but at what rate remains to be seen.”