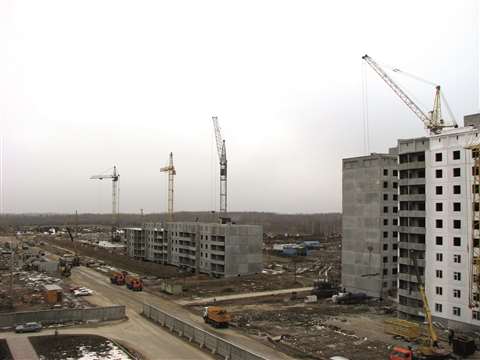 A construction boom in Kiev and other major cities is anticipated

A promising outlook with a sharp increase in sales is forecast for the tower crane market in Ukraine, Eastern Europe. Vladislav Vorotnikov reports.

Good news about the crane market is particularly welcome at the moment as it is fairly uncommon. Ukraine in Eastern Europe will be experiencing a strong rise in demand for tower cranes in 2017, as the country’s construction industry shows its first signs of revival from the low of a year ago. This is according to Yuri Sarana, head of JSC AviaTechService Company, one of the largest importers of cranes to the country.

Sarana explained that for several years Ukraine’s construction industry was in a deep depression and during this period most construction companies preferred to rent cranes. As a result there were almost no sales of cranes in the country since the start of the current crisis in 2014 and now the market is experiencing the deferred demand effect.

Many of the tower cranes in the country are old. Alexandr Bain, chief constructor at Ukrainian construction company PTS Obolon, expressed the same opinion, estimating that out of 5,036 tower cranes registered in the country as of early 2017, nearly 4,500 of them had either passed or were approaching the end of their expected lifetime. This means that to ensure safe operation of building sites, this equipment should be urgently replaced with new units.

According to the country’s State Statistical Service, Ukraine was importing roughly 250 tower cranes a year in the period 2011 to 2013. In the first months of 2014, however, sales almost completely stopped. Sarana believes that in 2017 the country’s crane market will get back to at least the pre-crisis level. He added that high demand may make it possible to even go beyond that.

Ukrainian consulting agency Eurostandart describes the country’s market for tower cranes, as the market of “the European second hand,” explaining that even in better times up to 80 % of sales in Ukraine were accounted for by used cranes from countries of Western Europe, including Germany, Belgium and the Netherlands.

Market participants now believe that in the period 2017 to 2019 it is most likely that the situation will remain the same. This is because although the first signs of the revival of the country’s economy are already apparent, business forecasting in Ukraine still suffers from a lack of predictability, so very few companies really would be able to invest large amounts of money in new cranes.

The vast majority share of used cranes imported into the market in recent years brings additional problems now. This is because some parts of the imported equipment were already close to the end of their expected life so, now, even some of the equipment brought into Ukraine between 2011 and 2013 also needs to be replaced.

The State Statistical Service also added that in January and February 2017 Ukraine had 21 % more buildings under contruction than in the same period a year earlier. The country’s construction industry in 2016 increased output by 13 % compared to 2015, with a significant proportion of the increase being observed in the second half of the year.

At the same time, government agencies indicate that the current statistical information should not be compared with the pre-crisis 2013, primarily because back then the market’s volume was different. The statistical services now don’t include information on the so-called temporary occupied territories, including Crimea and eastern parts of Donetsk and Luhansk Oblasts, occupied by pro-Russian forces.

Sarana also said that his company, just like some other market participants, suffered from this conflict, because some of company’s cranes were left in these territories, controlled by rebels. In these regions the equipment was nationalised and is now being used in the local construction industry. This local industry has no alternative because the purchase of any new or used cranes there has been made impossible due to international sanctions.