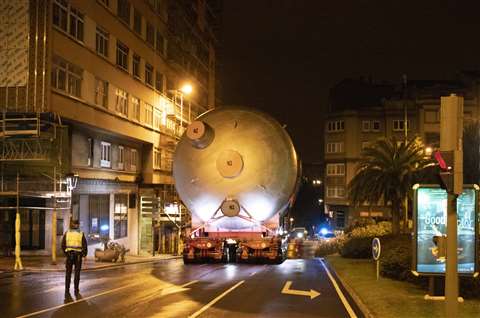 ALE moves the 7.5 metre diameter vessel through the streets of A Coruña, Spain

The refinery employs around 1,000 people and produces 120,000 barrels of oil per day. The nearby port’s oil terminal accounts for 60 percent of its traffic.

ALE was contracted for the transportation and the lifting of a separator vessel. “By combining the work, ALE was able to manage the project’s multiple contractors and provide a smoother operation, completing it within two consecutive days,” the company said.

A preliminary transport engineering and technical study helped ALE identify the port most capable of receiving the vessel and the best route to the refinery.

The transport plan saw the load moved overnight to minimise disruption. A major challenge was to move large items through city centres not designed to accommodate them. In addition, space was also limited at the destination, in the refinery. ALE provided detailed engineering and procedures for the lift.

Permits were obtained and obstructive street lights and power lines were cleared. ALE also arranged for civil works to allow the load to cross a traffic island. The load was a 137 tonne third stage separator vessel and part of the FCC. Its dimensions were 12.1 x 7.5 x 7.4 metres (LWH). Its unusually large diameter helped make it the largest item ever transported through the streets of A Coruña.

Self propelled modular transporter was used to carry the load for several kilometres of the route. It was 12 axle lines in a 6 x 4 configuration, ALE said. SPMT enabled ALE to complete the transport in the port, on public roads and in the refinery without altering the transport’s configuration or changing the equipment type.

At the installation site in the refinery a pair of cranes (1,000 and 350 tonnes each) lifted the separator before its installation on a concrete pedestal.