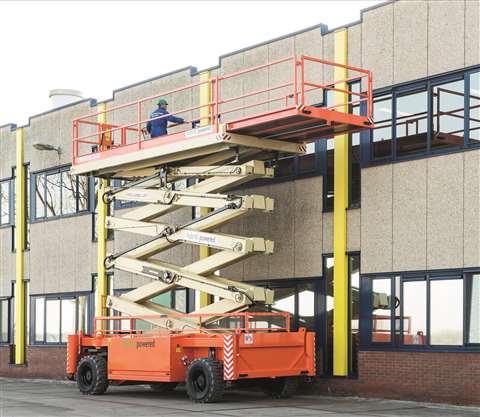 The large capacity scissor ascribes well to the general view that AWPS are getting bigger and more powerful, as are the the products at the top end of manufacturers that do not yet produce truely high capacity or big deck scissors. Engine and noise pollution are also top of the list in the modern design process, as are the implications of the new standards in North America.

Firmly in the big category is JLG’s recently unveiled 33m lift height 330LRT and 43ft 430LRT, at ConExpo during March, to complement its 53ft 530LRT and round out its family of large rough terrain (LRT) scissors.

Features of the JLG 2250 pound (1.02 tonne) platform capacity 330LRT and 430LRT include lower fuel consumption, a standard oscillating axle that gives better traction and grade climbing ability, and a standard optimised hydraulic system, as well as 45% gradeability across the series.

There are other important areas of development for big deck scissors, as seen in these recent launches. Rafael Nunez, product manager, scissor lifts at JLG Industries, explains, “Rigid and strong scissor stacks add stability and enhance operator confidence. The large platform has a spacious deck, and a standard 4 ft deck extension, which provides more room for people and materials. The pneumatic tyres were replaced with foam filled tyres. 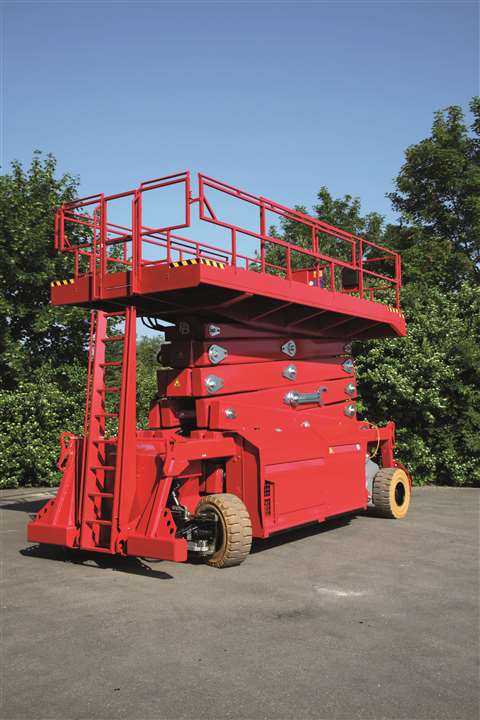 Nunez says customers want products that can operate in rough terrain environments. “For their business, it’s extremely important to have machines that are reliable and easy-to-service; with parts and service readily accessible should they be required.” The LRT series is extremely durable making them ideal for rental and on jobsites with rough terrain. They also feature a new, robust, easy-to-extend extension deck and all-steel hood.

A core focus for Genie, and indeed most of its competitors, is to truly understand the needs of customers and the changes in the aerial market. As Genie rolls out products in response to global requirements, such as the new ANSI/CSA (North American) standards, says Michael Flanagan, Genie product manager, Terex AWP, it will continue to closely monitor how customers worldwide use these new machines in the quest for developing new models.

Genie’s immediate updates to its big deck scissors is in response to new standards that effects the entire range, “With the upcoming changes to ANSI/CSA standards in North America, we have taken the opportunity to incorporate changes to nearly every model of Genie scissor lift.”

These changes will include brand new features such as load sense systems, which we have had much success with in our boom lift products, as well as smaller alterations such as toe guards on platform entrances.

“These changes are relevant to the new standards in North America but also standards set in other regions, such as EN280 in Europe,” says Flanagan.

Nevertheless, there are some advances specific to the big decks. “As the stowed dimensions and operational capabilities of slab and rough terrain scissors increase, the larger scissors are expected to accommodate higher payloads and additional occupants”.

The idea is to up the capacity wherever the opportunity. Flanagan points out that many Genie slab scissors, including the GS-2032, GS-2046, GS-2646, and GS-3246 models, exceed the industry standard 500 pound capacity with up to 1200 pound capacity and up to four occupants. Similarly, the Genie GS-3384 RT and GS-3390 RT units enable operators to carry up to 2500 pounds with up to seven occupants.

“High capacity and high occupancy scissors enable end users to carry more personnel, tools and materials to their jobsite, to help them get their jobs done faster.” 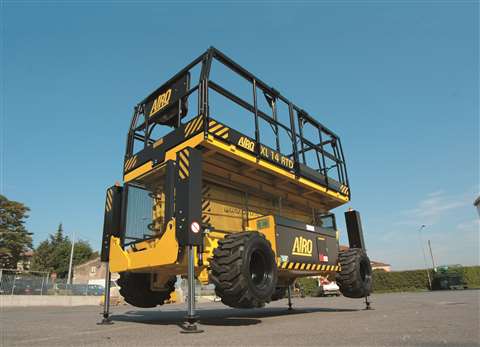 Looking to the future Flanagan adds, “There is growing demand in the rental industry for tailored solutions, such as application-driven machines, options and attachments. Increasing demand for taller slab and rough terrain scissors must be balanced with the need to not only take an operator up to height — but also additional personnel, tools and materials.

“It is critical that operators have solutions to manage items in the platform, including proper loading and securing of materials during operation.”

Skyjack’s newest and tallest DC electric scissor lift is the SJIII 4740, which was launched in the spring of 2016. It has a 13.8m work height, 90cm roll-out extension deck, 8.1cm raised ground clearance, 54 cm inside turning radius and 3.2km/h stowed speed.

The addition of the SJIII 4740 was made primarily to fit the needs of a niche market of large indoor commercial applications that RT scissors and booms cannot access. “This market has seen much more acceptance from end users in the last 18 months, and has made this machine a large part of Skyjack’s product portfolio,” says Kristopher Schmidt, product manager for DC/RT scissors and vertical masts, at Skyjack.

It has several operational benefits. It is drivable at full height with the roll-out deck fully extended, has 25% gradeability, welded cross bracing on its scissor stack and an overall capacity of 350kg.

Schmidt says, “In today’s market we’re seeing a push into hybrid technologies. The main driver of this is the need for machines to have access to both indoor and outdoor work that a dual fuel or diesel machine cannot access. The way that buildings are now being built has changed customers’ perceptions of these units. With walls now going up before foundations, the need for a low/zero emission machine that can operate on dirt is looked at positively, and these machines can be first on/last off site with no downtime for swapping machines mid-construction.”

We’ve been working on new ANSI 92.20 compliant machines over the course of the last three years. This will be an entirely new scissor line and you’ll see changes in our machines for all international markets to coincide with the implementation of these standards.

The main features for Skyjack’s large rough terrain scissors are that they have axle-based 4WD, rear differential and front limited slip differential, dual extension decks for an increase in workspace and are drivable at full height (SJ8831 and SJ8841 RT models only).

Schmidt adds, “The construction industry is starting to see progression in the use of telematics and fleet management software, to ensure their machines are being utilised properly with less downtime, and to give the rental companies a better understanding of their overall cost of ownership.” 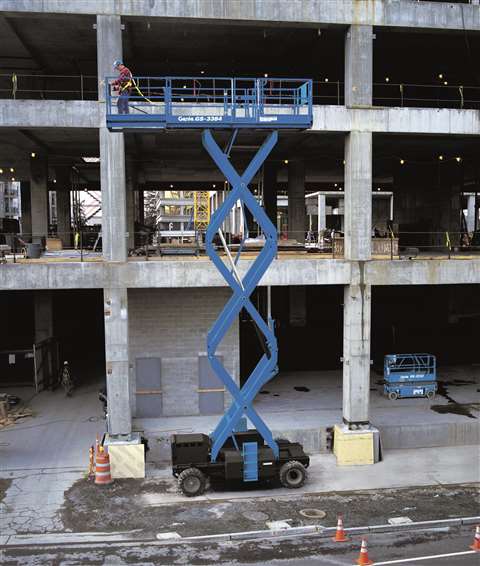 The near future plan is to expand its current range to incorporate these features. They would build on the 12m working height CX 12, launched in 2012, with a 1100kg load capacity and drivable at full height, along with the CX 15, introduced in 2011, offering a 15m working height and a 700kg capacity. A feature is the 7.3m platform length with extension, and “a platform as large as the chassis, for a better access to facade work.”

Holland Lift confirms the importance of environmental improvements. Its outgoing managing director Eline Oudenbroek, who has now left the company, told AI, “In the near future we will not develop and engineer new models as we did that the last few years. At this moment we will be focusing on making our range more ecological.” 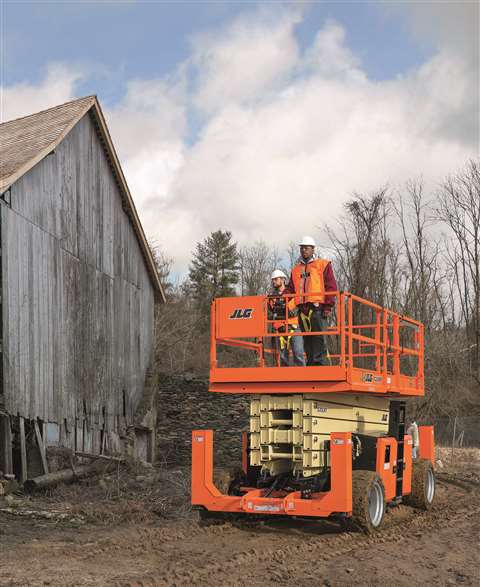 The HL-275 was the first Hybrid Eco scissor lift, launched in 2015. It has been equipped with the latest hybrid technology. “The great advantage of our hybrid scissor lifts is that they enable the customer to complete the entire project using a single machine.”

“Warehouses are of great influence in the evolution of high and ecological systems.”

The HL-330 E14, also launched in 2015 is the manufacturer’s solution for narrow workplaces. The machine is just 1.4m wide and has a working height of 33m – the first narrow scissor to reach that height.

In 2017 the company will be launching new models with either 27.5m or 32m working height, also with big lift capacities. Both heights will be produced in a Top 14 version with 1.4m width and a Top 24 with a width of 2.4m. All units will be drivable at full height, with four wheel drive and four wheel steering. The Top 14 will be battery powered and the Top 24 will be available in both battery and a diesel version.

Daniel Yassini, marketing and sales at PB, says, “Machines are getting continuously more and more working height and lift capacities. These new machines can be used both indoor and outdoor, have over 27 m working height and can be driven at full height.” Enough space and power for up to four workers, materials and tools is also a feature.

“Situations have changed, for example in power plants, at warehouses or construction sites,” says Yassini, “Everything is getting bigger and larger. So, you need more people

to work at the same time with more reserves of lift capacities for tools and stuff. 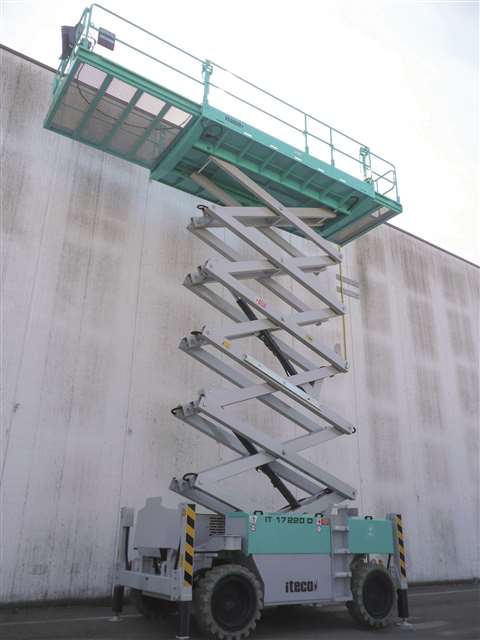 Holland Lift confirms the importance of environmental improvements. Its outgoing

The MEC 3392 RT-T scissor lift was introduced in 2015 and was developed from close co-operation with specialty rental for tunnelling applications – hence the 3392 RT-T designation. It has a 2650 pound (1200kg) rated platform capacity double deck for up to five persons and a platform height of 33ft (10m) and overall width of 92 inches (2.34m). The platform is 24.75 Ft (7.5m) long with both decks extended.

Specifications critical to productivity in tunnel applications are a 6.2 m/ph (10 km/h) stowed travel speeds, being 50% faster, to cover long driving distances quicker. Then there is the rated capacity, representing a 32% increase, to carry more equipment and complete more work per journey.

Rated slope operation was also much higher. The machine can drive at height on sloped surfaces, saving the time spent on outrigger deployment and retraction between elevated work tasks. Examples are:

The manufacturer will launch an Aviation Titan in the near future that provides a means of lifting very heavy loads, including APU Jet engines, into and out of the rear of aircraft while workers are using fall arrest harnesses from a fully guardrail protected platform. The machine will also allow two person ‘wing walking’ while having a platform capacity up to 4000 pounds (1815 kg).

This machine is in stark contrast to MEC’s relatively recent move into higher production slab scissors, which it has been launching at trade shows across the US. See the interview in the June/July issue of AI.