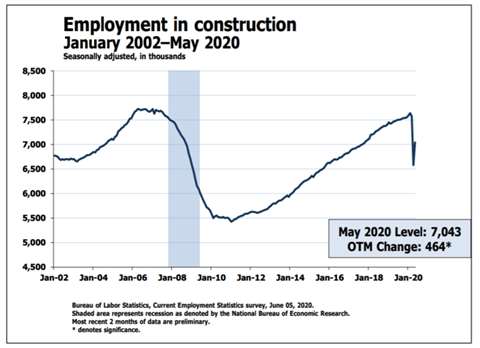 US construction is at 12.7 % unemployment

US construction employment rebounded by 464,000 jobs in May, but the total remained 596,000 below the latest peak in February and the industry’s 12.7 per cent unemployment rate was the highest for May since 2012, according to an analysis of government data by the Associated General Contractors of America (AGC).

“The huge pickup in construction employment in May is good news and probably reflects the industry’s widespread receipt of Paycheck Protection Program loans and the loosening of restrictions on business activity in some states,” Simonson said. “Nevertheless, the industry remains far short of full employment, and more layoffs may be imminent.”