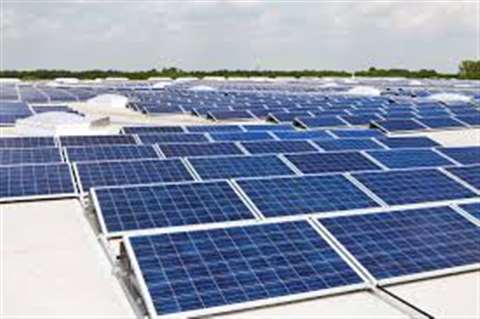 Futuristic proving ground The Ray and the Webber Energy Group, a research organisation in the Mechanical Engineering Department at the University of Texas, Austin in the US, have partnered to create mapping and research with the goal of using unpaved roadside areas along the US interstate system for potential solar energy generation.

The Ray looks at evolving ideas and technologies that will transform the transportation infrastructure of the future, beginning with the corridor of road that is named in memory of Ray C. Anderson (1934-2011), a Georgia native who was recognised as a leader in green business when he challenged his company, Atlanta-based Interface Inc., to reimagine the enterprise as a sustainable company pursuing a zero environmental footprint. Chaired by Anderson’s daughter Harriet Langford, The Ray is a part of the Ray C. Anderson Foundation.

As part of its partnership with The Ray, the Webber Energy Group analysed the unpaved roadside areas at exits along the US interstate system for solar energy generation potential. Through an interactive web-based tool hosted at www.TheRay.org, each of the lower 48 states now have access to projections of how much solar energy could be generated on their interstate exits.

According to the analysis, most states have more than 200 miles of interstate right-of-way (ROW) at exits suitable for solar development, which combined could generate up to 36 TWh per year of clean energy, and provide approximately US$4 billion in economic value to State Departments of Transportation (State DOTs).

“Interstate solar just makes sense,” says Harriet Langford, founder and president of The Ray. “As our transportation systems become smarter and electrified, we will need more energy available, closer to the interstate and interstate exits, and more funding to support the infrastructure demands. By enabling renewable energy generation using the idle roadsides, our DOTs can help to fill this gap.”

Michael Webber, Josey Centennial Professor in Energy Resources and Professor of Mechanical Engineering at UT, says, “The aim of this project is to provide a report and mapping tool by which State DOTs or other interested parties can assess the potential for installing solar in the interstate ROW in all contiguous 48 states. We have found that when stakeholders have unbiased information available to them, they can make energy decisions with a lot more clarity and confidence.

“That’s our goal with this study: to help people understand the potential for interstate solar so that policymakers, developers, and investors have a clearer view of the opportunity,” Webber adds.

Individually, most states have interstate solar potential in the thousands of GWh per year. At a typical retail price for electricity of ~US$0.10/kWh and a wholesale price of ~US$0.02/kWh, this means states could generate carbon-free electricity with a value of millions to tens of millions of dollars each year (US$2.5 to US$181.4 million/year, depending on the state). State DOTs can also take advantage of operational cost savings - like reduced roadside maintenance and reduced energy costs - and even new revenue streams, over the lifetime of the project, which could be 30 years or more.

“No matter how they decide to structure the deal, State DOTs win on all fronts by optimising underutilised land to generate clean renewable energy that benefits their communities, the environment, and their budgets,” Rogers adds.

Interstate roadsides can be appealing areas for renewable energy development because they offer unshaded acreage, ease of access, public ownership status, and lack of competing development efforts. Because exits have more room to accommodate the transportation safety requirements, such as safety setbacks, they are ideal locations for solar development. However, not all State DOTs have publicly available, full spatial ROW data sets, which presented a barrier to specific assessments of and planning for solar arrays in the ROW.

In February, the Georgia Power Company commercialised a one-megawatt solar array on the ROW at Exit 14 off Interstate 85, which is known as “The Ray Highway.” Georgia is the third state in the nation to utilise interstate property for renewable energy development. The project on The Ray Highway also pilots the use of native, flowering plants as ground cover within the solar array, making Georgia the first in the nation to install pollinator-friendly ROW solar. Currently, The Ray is assisting transportation operators in five other states to develop similar projects on their own interstate roadsides.