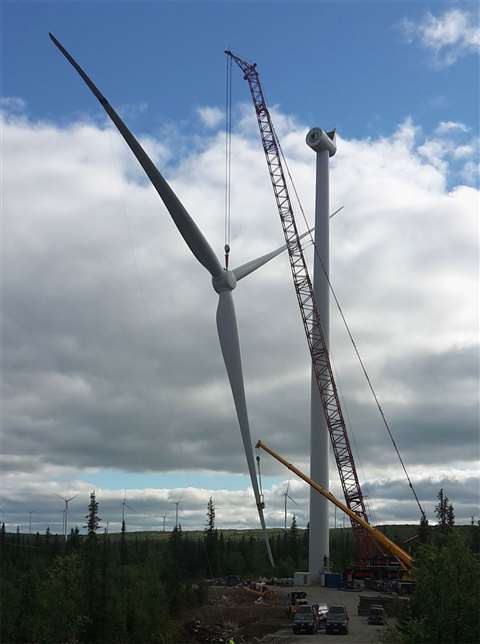 The project included the shipping, onshore transportation, crane operations and both mechanical and electrical installation. By managing the entire project, Mammoet was able to optimise the whole process and deliver the nine turbines two weeks ahead of schedule.

Nine Siemens SWT 3.2 Direct-Drive turbines were manufactured by Siemens Wind Power in Denmark. Mammoet picked up the turbines, blades and other components at four different production facilities and transported them to the port of Aarhus in Denmark. At this central point a load out of all components for shipping to the port of Skelleftehamn in Sweden was performed. After the load out all components were transported to the Juktan project site by truck on conventional trailers. Mammoet Wind participated in the road surveys along the transport route beforehand and provided engineering support for road layouts and hardstands on site.

The Juktan wind farm is located in a forest area with very limited space for manoeuvring, particularly for three of the nine turbines. For six turbines there was enough space to perform a full rotor installation in which the complete rotor with three blades would be installed at once. Because of the limited space available for three of the turbines, it was initially thought that these could only be installed by means of a single lift operation, during which each blade would be lifted and installed separately.

Seeking a more efficient approach, Vattenfall requested a review of the possibility to perform a full rotor lift on all nine turbines, the company said. A lifting plan was prepared by Mammoet and, alongside the crew’s skill and experience, enabled them to perform all nine operations as full rotor installations, despite the restricted space. The integrated approach saved almost two days of installation time per turbine and two weeks in total.

The Juktan project is the start of an ongoing collaboration between Mammoet Wind and Vattenfall.

Brian Bech Hansen, project manager at Mammoet Wind, said, “By carrying out the entire project scope Mammoet Wind has demonstrated the benefits of one contractor taking on the full responsibility for executing a project.”

Stefan Karlsson, project manager at Vattenfall, agrees, “By managing the shipping, transport, crane and installation contract in one package we were closer to the project and that made it possible to find suitable solutions during construction. The cooperation between Mammoet, Vattenfall and Siemens in the Juktan project was excellent.”