Versatility at your fingertips

Rental companies, contractors and manufacturers alike all agree: the rotating telehandler market in North America has stepped out of its infancy.

“I believe today’s contractors are always looking to the bottom-line cost to run a job,” says Clint LaBontè, Applied Machinery Sales territory manager, New England. “I believe, also, they are become more versed in the pluses of rotating telehandlers. Many jobsites are smaller and closed in, so a versatile piece of equipment with a smaller compact footprint, such as the Merlo Roto, means more ‘bang-for-the buck’ and its usage brings a strong return rate for the company.”

With a rotating telehandler, the process of placing materials on jobsites changes. The traditional telehandler picks materials, drives into position and places the materials where used. With a rotating telehandler, the machine can be placed in one position and use the long reach of the boom and rotation system to pick materials and place them where needed. This provides quick and efficient material placement and allows for the work to be done in smaller spaces which can be an important benefit in larger cities where jobsite space is restricted. 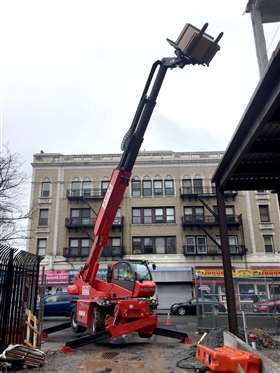 With its headquarters near New York City, ABLE Equipment Rental is one company that understands the need for ease of movement and placing product cramped quarters. The rental company is in its fourth full season representing rotating telehandlers, and its fleet has grown to 25 units.

“We’ve seen the rotating telehandler market, especially in confined areas like New York, has grown considerably,” says Chris Pera, chief operating officer of ABLE. “The use of this product group is both efficient and safer than traditional telehandlers.”

Along with maneuverability, diversity is key.

Jorge Salas, president of Dieci Americas Telehandlers, says rental companies have been adapting and increasing their fleet with rotating telehandlers because of the machines’ ability to utilize a range of attachments.

“Customers have been adapting well, especially when they test the machines and see how versatile they are with greater safety,” Salas says. “These units have greater capacities, reach, 360-degrees of continuous rotation, versatile accessories and more. These machines are five machines in one which translates to have less maintenance, less operators and less worries.”

LaBontè says the market has picked up considerably over the last two years for Applied Machinery Sales.

“When rotating telehandlers first made their debut in the late 1990s, the market only sold about a dozen machines in North America,” LaBontè says. “At that time, there were only two manufacturers in the North American market: Manitou and Terex. Today, there are four real players in the market, this includes Merlo. We are selling more than a couple hundred machines a year in the U.S. market alone. Canada could be more than a couple hundred; they follow the European market and equipment trends.” 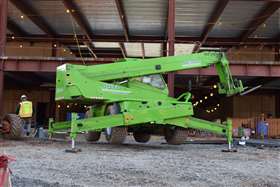 Merlo telehandlers are distributed in the U.S. through Applied Machinery Sales, and in Canada, the machines go through Manulift’s channels. Michel Robert, marketing director for Manulift, says educating future clients will assist in the market acceptance and growth of rotating telehandlers. He sees many of the units getting to work in Toronto and Montreal.

“The machines are getting more popular as people start to realize the versatility of this equipment compared to a crane or regular telehandler,” Robert says. “So we have more and more demand from all trades asking specifically for rotating telehandlers. The market is in fact shifting toward rotating telehandlers faster over the last 18 months than ever before.”

Robert says for quite some time the top reach for rotating telehandlers was around 100 feet. “After years of R&D, Merlo is coming to market with a 115-foot unit,” he says. “Other companies are going to follow that pattern.”

Gary Weisman, vice president of Paramount Equipment, which distributes Magni Telescopic Handlers, agrees that an industry trend is for the units to lift higher and more.

“As the market becomes aware of higher lifting and higher capacity machines that rotate continuously 360-degrees, it trends in this direction,” Weisman says. “The market is leaning towards 100-foot plus lifting heights; of course everyone wants to lift more so we expect the demand for 6-ton and larger machines to grow.”

Magni currently offers four high reach machines within its family of 14 rotating telehandlers. These include lift heights of 98, 114, 127 and 150-feet. All of these rotating units have a 13,200-pound lifting capacity. In addition, Magni recently introduced the RTH 8.25 SH with a lifting capacity of 17,600 pounds and a lift height of 81 feet.

“While still early in its evolution, many more customers are realizing the safety, versatility and efficiency of rotating telescopic handlers from Magni,” Weisman says. “In many scenarios, customers have been able to eliminate the need for multiple machines as Magni offers an extensive line of attachments that allow our machines to also be used as a telescopic forklift, rough terrain crane, aerial work platform, along with many other functions. The growth of Magni is unprecedented in this market.”

Weisman says the rotating market will continue to grow.

“The rental sector is dipping its toe into this segment and having very positive results,” he says. “Magni has partnered with two of the largest rental companies in the U.S. and the reception has been pleasantly overwhelming.

“In addition, we’ve had great success with some regional rental companies. We also see substantial opportunity in the power generation segment with both our RTH and HTH lines. We see that when we put a machine in service in any market, it attracts attention and yields other opportunities.”

Jeff Bohne, president of sales for Imperial Crane, says market acceptance is definitely increasing for rotating telehandlers because the units are more visible with large contractors and rental houses. Imperial Crane has had its rotos used on highway construction, bridge building and refineries.

“Contractors and rental houses are starting to recognize the versatility of rotating telehandlers,” Bohne says. “They have several attachments including man baskets, jibs, buckets and forks available which enables one machine to replace several other machines on a given jobsite.”

“It’s actually a win/win situation for customers and rental houses,” he says. “The versatility of the rotos and their attachments allows the customer to do jobs that usually would require more labor or a number of different machines while providing good rates for rental houses.”

Steve Kiskunas, product manager of telehandlers for Manitou Group, attributes industry acceptance and growth due to new models being introduced that are extending the ability of the rotating telehandler in two directions with higher lifting units and units with greater capacity.

“You see this trend with the introduction of the Manitou MRT 3255 model with a lift height of 103 feet and the Manitou MRT 2470 model with a maximum capacity of 15,400 pounds,” Kiskunas says. “We expect continued interest and sales growth of rotating telescopic handlers as contractors start to understand how the rotating telescopic handler can make them more productive in their work.” 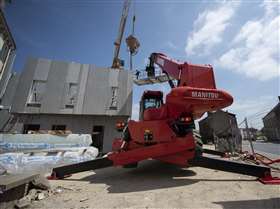 Manitou is seeing contractors in all trades using rotating telehandlers – from framers and masons to general contractors and roofers.

Manitou is seeing contractors in all trades using rotating telehandlers – from framers and masons to general contractors and roofers.

“Right now many of the rotating units are used in areas where the high lift heights are needed such as larger urban areas,” Kiskunas says. “As the benefits of quick material placement is understood by more contractors and the comfort level increases with the operation of the units, we expect to see the adoption of even more rotating telescopic handers.”

But will the U.S. and Canadian market for rotating units ever be as big as Europe’s? Depends on who you ask.

“No, I do not believe so,” says LaBontè. “In Europe, the cities are older and tighter in foot print. The European markets have been using rotos longer and really see the benefits.

“In the U.S., we still believe in using cranes and cherry-pickers to place material in, or at high landing spots. The U.S. construction market has contractors still looking at the way they landed loads in the past. Many are not familiar with rotating telehandlers and others have a hard time wrapping their heads around the equipment’s rental cost and higher than standard telehandlers purchase price tag, versus the overall long-term cost savings found within their benefits. Canada is way ahead of the U.S. in using rotating telehandlers.”

Manitou expects that the benefits of rotating telehandlers will allow them over time to be as popular in North America as they are in Europe.

“However, we are not there yet,” Kiskunas says. “Even though Manitou rotating telescopic handlers have been available in North America for over 30 years, the adoption of this product into mainstream construction use has been slow. We are encouraged by the growth over the last five years and expect to see even more growth over the next five years.”

“They will become more and more popular, but maybe not as popular as they are in Europe just because the density isn’t the same,” Robert says. “In Europe, space is a big problem, so you absolutely need a compact machine capable of lifting higher. Here, most cities still have room to growth and not every jobsite is as narrow.”

But others remain optimistic about acceptance and growth in the U.S. and Canada.

“We believe that rotating telehandlers will eventually become far more popular in the U.S. as they are in Europe,” Weisman says. “If for no other reason, it will be solely based on safety. The fact is today an operator can lift 12,000 pounds in the air over 50 feet and only rely on paper load charts and a series of letters on a boom to ensure they are operating safely when they could be using a Magni rotating telescopic handler and have the ability to see exactly how much weight they are lifting and where it is at in their safety envelope with the simple glance at a full color, live load chart on a screen inches from the operator in the cab.”

“This full-color, highly intuitive touch display panel interface allows the operator to manage the entire machine with little effort,” Weisman explains. “There is a driving page (three modes of steering including front axle - street legal with speeds to 25 mph, crab – for tight spaces, and 4-wheel), stabilization page, interactive load chart page, command page and customization page. Magni employs automatic R.F.I.D. recognition of all attachments. This allows for an automatic load chart (no paper charts for the operator to figure things out) and significantly enhances safety. The result is that the operator can work faster and safer realizing productivity gains of upwards of 30 percent.”

More work in less time? Seems like a no-brai