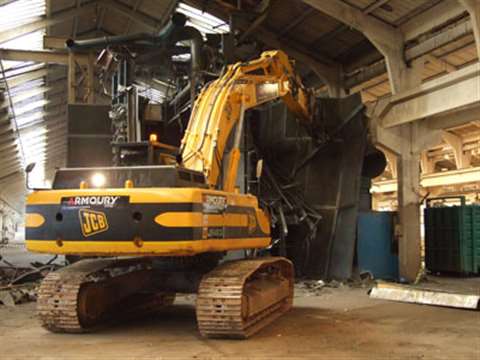 The JS 460 tackles the old shot blasting shop armed with a Demarec MQP-60.

The Bamford family, which owns JCB has had premises on Pinfold Street in Uttoxeter's town centre for almost 140 years. It began life as an agricultural equipment manufacturer in 1871 under the ownership of Bamfords Ltd. This company went into liquidation in 1980, and in 1989 the site was acquired by the more famous Bamford family company, JCB.

In recent years the factory has been used by JCB Heavy Products to manufacturer the company's tracked and wheeled excavators, but the boom in demand in the early- to mid-part of this decade saw the premises pushed to their limit.

JCB tackled this by investing UK£ 40 million (€ 44 million) in a new state-of-the-art factor on the outskirts of Uttoxeter with much more direct access to the A50 trunk road. The new factory will allow JCB to manufacture 8000 excavators per year, compared to 4500 peak at the old site.

With production getting into full swing at the new JCB Heavy Products factory in January, the time came to demolish the old factory so the site could be redeveloped.

JCB chairman, Sir Anthony Bamford said, "This is the end of an era because my family has been linked to this site since the 19th century when Bamfords Ltd started manufacturing agricultural machinery. But this is also the start of a new and exciting era not only for JCB's excavator business, but also for Uttoxeter because the relocation offers the opportunity to redevelop and enhance this important area of the town."

A master plan for the site is currently being developed by London-based architect McDowell + Benedetti Architects, which won the design contest run by the Royal Institute of British Architects (RIBA). The 22 acre (8,9 Ha) area is set to be redeveloped as a ‘mixed use' site, with up to 257 residential units being joined by shops, restaurants, a petrol station and either a police station or doctor's surgery, along with park land.

While this proposal works its way through the planning permission machine at East Staffordshire Borough Council, Birmingham-based Armoury Demolition Group is handling the three-month contract to raze the factory to the ground.

It is a painstaking process, due to the presence of asbestos-containing roofing panels over all of the factory's enclosed spaces. These are being removed by hand to prevent them breaking and releasing asbestos fibres, a task that is being carried out by two workers using a Genie GS-5390 scissor lift to get them up to a comfortable working height, and also to transport the panels to the special asbestos disposal skip.

But while the hand dismantling goes on, it certainly doesn't mean there is no heavy demolition on site. Far from it!

Although JCB transferred some machine tools up to its new excavator factory, there were some pieces of kit in the old factory that were due for an update. Among these were the old paint facilities, which have been replaced at the new factory with a state-of-the-art six-stage paint process.

A 46 tonne JCB JS 460 excavator equipped with 4,4 tonnes of Demarec MQP-60 multi processor was the main tool for dismantling the plant and chopping the metal structures down to manageable sized pieces for recycling. One of two 22 tonne JS 220 excavators was also on site helping to tidy up after its larger sibling by gathering scrap metal and loading it into skips with a Demarec grapple.

The shot blasting plant was the last major piece of equipment within the factory to be demolished. Once this is out of the way, Armoury's task will be to remove the remaining roof panels, before bringing the big machines back in to demolish the supporting columns and roof beams.

With the master plan for the site yet to be finalised, Armoury is taking the factory down to floor level, but not going any further. It will use crushed concrete from the columns to fill the various pits in the floor slab left by the old factory machine tools, and any excess rubble will be used to batter-up a retaining wall along the north-western edge of the site. The rubble will be crushed on site, but none will be removed for tipping or recycling.
Equipment Projects Excavators Tracked Excavators Demolition Construction Demolition & Recycling
Related Articles