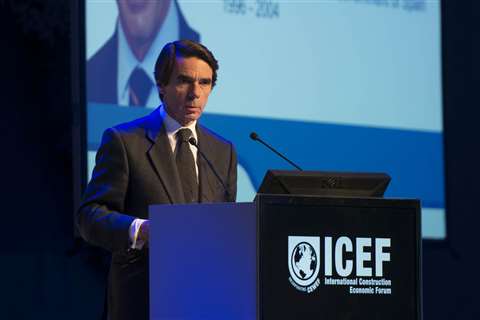 In his keynote address at the inaugural International Construction Economic Forum (ICEF), Mr Aznar, who was in office from 1996 to 2004, also said he did not share the view that Europe is condemned to a long period of decline.

"Europe still holds a key position in world," he said. "But we cannot sit back and watch the world. Europe must recover a sense of purpose and set out plan of action that can be supported across the EU."

Mr Aznar highlighted the construction sector as being of strategic importance to the EU, representing more than 10% of GDP and over 50% of fixed capital investment.

"Construction is the biggest industrial employer in Europe, with more than 20 million direct employees and affecting some 44 million workers across Europe.

"Europe faces challenges in maintaining extensive power, transport and other infrastructure networks. Globally, it is estimated that some US$ 57 trillion is required between now and 2030 simply to keep up prior GDP growth.

"Lots must change in Europe to achieve this goal - factors currently influencing the future competitiveness of the construction industry include the shortage of public investment due to the fiscal positions of most Member States. In addition, there is a shortage of skilled workers. The EU cannot afford to fail to win the battle for competitiveness."

The inaugural International Construction Economic Forum (ICEF) takes place from 20 to 22 November at the Hotel Okura in Amsterdam, the Netherlands. Full coverage from the event will be available soon.