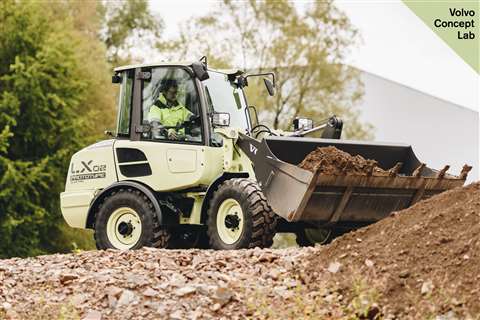 The LX2 is not yet commercially available

The LX2 is a second-generation prototype that is part of a research project and is not commercially available. To make the machine electric, the combustion engine has been replaced with a lithium ion battery. This stores enough electric energy to operate the machine for eight hours in its most common applications, such as light infrastructure construction and landscaping.

The machine also incorporates two dedicated electric motors, one for the drivetrain and one for the hydraulics. Decoupling the subsystems has led to higher efficiency in both the systems and the entire machine.

“It incorporates the latest advanced chemistry battery technology. As it’s electric, no particulate matter, nitrogen oxide or carbon dioxide are released into the environment. This, together with the fact that it has extremely low noise levels, makes it ideal for use in cities and densely populated areas, as it can be used without disturbing people. This is the same for the EX2 100% electric compact excavator, therefore the machines would be ideally suited to working alongside each other.”