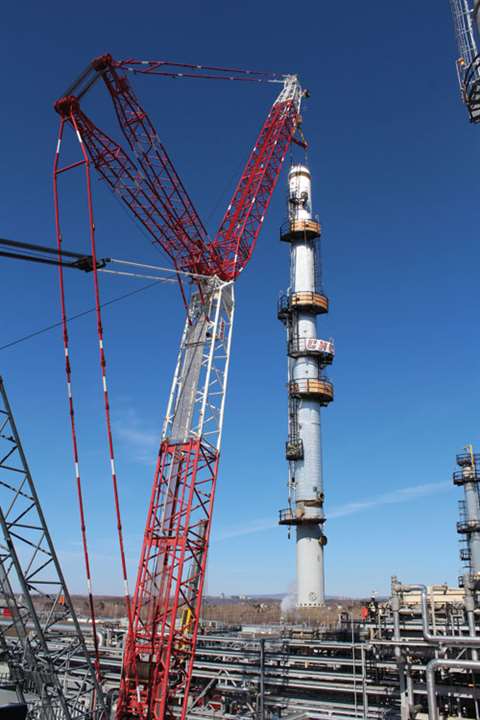 This year’s entries for the IC Top Lift 2014 competition is a selection of impressive lifts completed in the last 12 months.

Readers are asked to pick their favourite from our selection of 10 outstanding lifting projects. To register your vote, please complete and return the form available here by Monday 24th November 2014.

Steil Kranarbeiten, based in Trier, Germany, used a Terex Superlift 3800 lattice boom crawler crane to help build a 440 metre long bridge in Luxembourg. For the project 14 steel girders were set down on concrete piers. The steel sections were 96 metres long and 7 m high and weighed 295 tonnes each. The 650 tonne capacity crane was set up in a SSL1 configuration with a 72 m main boom and 250 tonnes of counterweight on the superstructure. The crane had 50 tonnes of central ballast and 200 tonnes of counterweight on the superlift tray, a company spokesperson added. To position the girders on their supporting pylons, the 3800 lifted the girders to a height of 22 m and was crawled 50 m forward. The load was then moved into position before it was placed down. The lifts were made at a working radius of 23.5 m.

Italian lifting company Vernazza Autogrù helped recover an Intercity 660 train following a landslide near the cliffs of Capo Mimosa, Italy. The train derailed on tracks between a vertical rock face and the sea. To lift the train back onto the rails, a Terex AC 700 was secured onto a floating dock, along with an AC 100/4 L and an AC 140. To safely carry out the challenging lift, the AC 100/4 L was lifted from the barge onto the rail tracks, where it was able to lift the train back onto the tracks.

Chunjo Construction used a Manitowoc 31000 crawler crane to lift a 670 tonne wash tower at the Korea Petrochemical LTD plant in Ulsan, South Korea. The wash tower was 92 metres tall and weighed 670 tonnes. To carry out the lift the 2,300 tonne capacity crawler was configured with 120 m main boom and positioned between existing refinery equipment and a small river, leaving a limited space of only 15 m for the counterweight. The 31000’s variable position counterweight (VPC) system made the lift possible because the counterweight could be suspended above the ground, a company spokesperson said.

International heavy lift and transport specialist ALE has claimed a world record with the load–out of the 47,830 tonne Arkutun Dagi topside. The UK-headquartered company said that it is the world’s heaviest load out. It was a combination of the 42,695 tonne topside on a 5,135 tonne support frame. ALE’s scope of work included the pulling operation using strand jacks, a high capacity modular ballast system and precision 3D barge monitoring. The weight of the load meant that the working tolerances of the barge were much smaller than during a conventional load out. The Arkutun Dagi field is off the east coast of Russia. It is expected to be the largest oil and gas production platform in Russia and the first oil is to be produced in the next 12 months, ALE said.

Crane service provider, Felbermayr, headquartered in Austria, used a 1,000 tonne capacity Liebherr LR 11000 crawler crane to lift steel cylinders at the Petrom refinery in Plojesti, near the Romanian capital Bucharest. The largest cylinder was 58 metres long with a 4 m diameter and weighed 335 tonnes. The lift had to be carried out in a constricted area while the plant was running. The largest column was lifted at a radius of 27.5 m.

Crane service provider Guay Crane lifts a 97 tonne column at Valero’s Refinery in Levis, Quebec, Canada. The column was lifted at a radius of 41.7 metres using a 600 tonne capacity Terex CC 2800, configured with 35.9 m of main boom and 41.7 m of luffing jib and 250 tonnes of superlift counterweight. The tailing crane was a Grove GMK6300L with full counterweight.

Aertssen Kranen helped with the assembly and construction of a stinger for the offshore construction vessel Pieter Schelte. The parts for the stinger weighed 100 to 500 tonnes, with sections so far up to 48 metres long, 18 m wide and 24 m high. Most of the parts were lifted using a Terex AC 700, two AC 500s and a 300 tonne Grove GMK6300L. To complete the tasks, the 300 tonne Grove GMK6300L had an extended boom to provide an 80 m reach. The two 500 tonne capacity AC 500’s were configured with 90 m luffing fly jib, superlift attachment and 7 – sheave hook block. The 700 tonne capacity AC 700 was configured with a luffing fly jib, superlift attachment and 7 – sheave hook block. Scheuerle SPMT was used to transport the sections on and off the vessels.

International lifting and transport specialist Sarens from Belgium used its 3,200 tonne capacity SGC – 120 super heavy lift crane to install a reactor head at a nuclear power site in Flamanville, France. The nuclear reactor head weighed 350 tonnes and was lifted at a radius of 140 metres. The SGC – 120 was assembled in a space measuring 50 x 200 m. It has a base of 44 x 44 m and was configured with a 170 m boom. A new heavy duty jib was built especially for this project to lift up to 1,500 tonnes at 40 m radius. Two auxiliary cranes, a 500 tonne capacity Terex Demag CC 2500 crawler crane and a 350 tonne Liebherr LR 1350 crawler crane, were used during the assembly process. The coastal location of Flamanville made wind speed a primary concern. The team had to wait for perfect conditions before the lift could be carried out. With the weather on their side the lift took one day to complete.

Fagioli, from Italy, used 12 tower lifts and 168 strand jacks, plus 48 lines of SPMT for a parbuckling operation to remove the wreck of the Costa Concordia cruise ship. Phases of the project included detaching the wreck from the rocks where it rested, using strand jacks to rotate the vessel 25 degrees, and rotating to a final total of 64 degrees by means of jacks and ballasting of sponsons. Stabilisation was carried out by securing four anchor blocks to the sea bed between the centre of the wreck and the coast by 300 and 450 tonne strand jacks. Seven additional anchor blocks and 12 towers were installed to secure the position of the wreck’s keel during rotation.