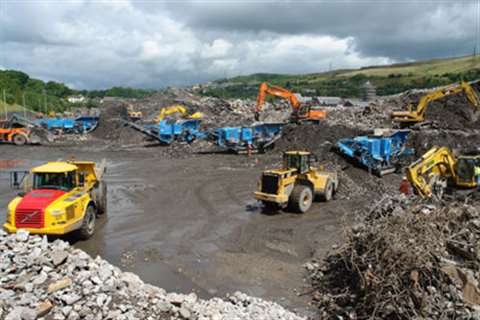 Aberdare, Wales, based crushing contractor Celtic Crushing is using four Terex Pegson mobile crushers to process more than 135,000 tonnes of concrete slabs broken out during the demolition of the Ebbw Vale steelworks, which closed in 2002. The closure left 81 hectares of derelict industrial structures, and the site is now the subject of a £9.5 million (US$16 million) site remediation contract, which is being overseen by main contractor Edmund Nuttall. The contract involves the clearing of contaminated ground through to full site clearance and landscaping, and also specifies that the minimum of material should be disposed of off-site. Celtic Crushing has brought its equipment on site to produce –200 mm (-7.9 in) product that is used on site as general fill.

The four machines, two Premiertrak 1100 and two new XR400 jaw crushers (replacing the Premiertrak 1100 in the Pegson range), are processing the 600 mm (24 in) thick concrete slab that covers most of the area. This is broken down using excavator-mounted hydraulic breakers and then fed to the crushers.

Celtic Crushing operations manager Ben Sherrat reports that the nature of the material being process, with its heavy steel rebar reinforcement, has caused difficulties with other manufacturers’ machines that were used prior to the arrival of the Pegson units. He said: “When dealing with large amounts of rebar in the concrete, the machines have to clear it without blocking. With the Terex Pegson machines, good clearance is provided, so these problems are alleviated.”
Projects C&D Recycling Demolition & Recycling
Related Articles