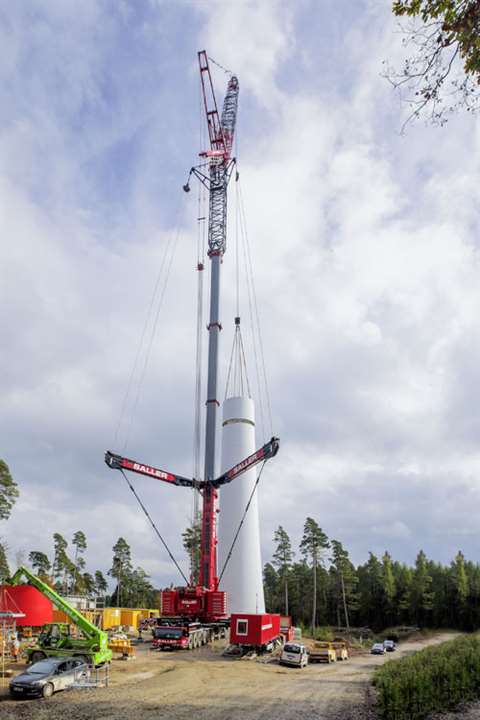 Crane and transport service provider Kran Saller, based in Deggendorf, Germany, has used its new Liebherr LTM 1750-9.1 at the Berngerode wind farm near Fulda, Germany.

The 750 tonne capacity wheeled mobile telescopic crane was used to erect concrete towers up to 89 metres high. Lifts included foundation rings, which weighed 80 tonnes, and steel tubular tower segments, which weighed 55 tonnes. For the job the LTM 1750-9.1 was configured with Y-guying system and a 35 m luffing jib.

A Liebherr LR 1600/2 crawler crane was used to erect the remaining sections of the turbines, including the steel tubular tower up to the hub height of 139 m, the nacelle, the hub and blades, a spokesperson said. In total, 12 GE 2.5 MW turbines are being built at the site.

Sascha Wolf, Kran Saller project planner, said, “The LTM 1750-9.1 from Liebherr is the only crane in this load capacity class which can erect the concrete towers for Max Bögl.”

The next job for the LTM 1750-9.1 will be at the Hohenstein wind farm near Wiesbaden, Germany, where it will be used to erect three wind turbines.

Mammoet moves bridge in the night
The bridge weighed 5,000 tonnes and was approximately 30 metres high