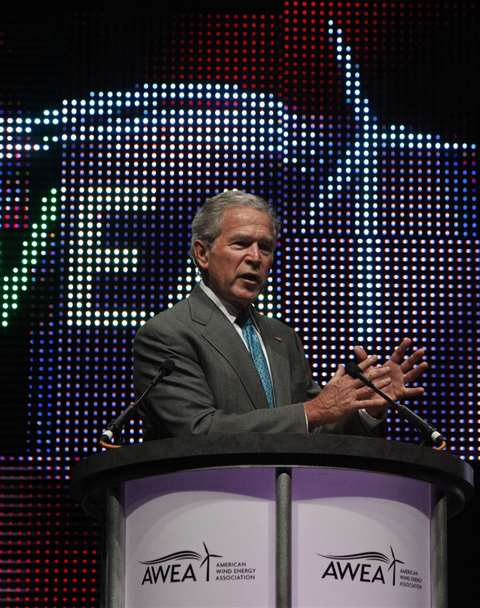 Nearly 20,000 attendees and 1,393 exhibitors packed the Dallas Convention Center this week for the American Wind Energy Association's annual conference and exhibition. With exhibitors ranging from turbine manufacturers to blade inspection equipment, the show drew a diverse and buzzing crowd.

On Tuesday, May 25, former President George W. Bush spoke to attendees about his home state's involvement with wind power. "When I was governor, we set out a goal to get 2,000 mW of wind energy over 10 years," he said to the crowd. "I'm proud to say we got more than 9,000 in 11 years."

Bronto Skylift discussed its S-90 HLA high level articulated truck-mounted aerials, which Abilene, Texas-based TGM Wind Services recently took delivery of. The lifts can reach nearly 300 feet. "A lof of people walk by and ask what kind of cranes they are," said Bill Hindman, spokesman for Bronto Skylift. "We then explain they're not cranes."

The Brontos were purchased by TGM to inspect and maintain wind turbines, with TGM saying the machines work faster, more safely and more accurately compared to other methods in use.