The World Demolition Summit (WDS) has opened in Dublin, Ireland with delegate registrations of close to 400 repeating the success of the London event 12 months ago.

Organised by Demolition & Recycling International (D&Ri) in co-operation with the European Demolition Association (EDA), this is the 10th year of the combined conference, awards dinner and networking event.

And there was a special moment right at the start of today’s proceedings when EDA president Francisco Cobo presented D&Ri editor Steve Ducker with a special plaque to mark the milestone achievement.

Dublin is hosting the WDS for the first time so it was fitting that Patrick Tinnelly took to the floor as the keynote speaker.

Patrick, who combines being commercial director of the Tinnelly Group with the role of president of the newly re-established Irish Association of Demolition Contractors, was speaking on “Surviving the crash: managing a demolition company through an economic downturn”. 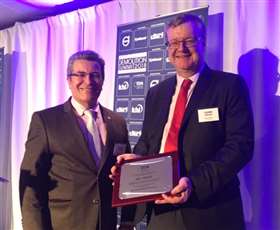 Headline sponsor of the WDS is Volvo Construction Equipment