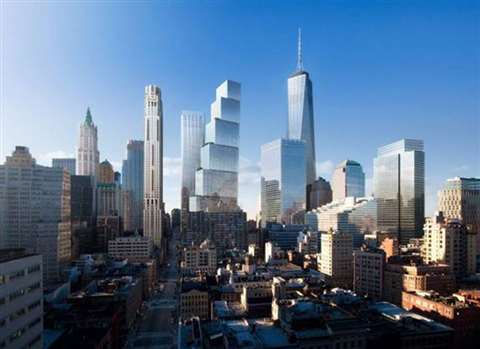 Plans for final part of the redevelopment of the World Trade Center in Lower Manhattan, New York, US, have been revealed by architects BIG (Bjarke Ingels Group), based in New York and Copenhagen, Denmark.

Located at 200 Greenwich Street and bounded by Church Street to the east, Vesey Street to the north and Fulton Street to the south, the 2 World Trade Center (2 WTC) tower will rise to 1,340ft (408m), and it is said that it will be “respectfully framing” the 9/11 Memorial Park alongside One WTC, 3 WTC and 4 WTC.

The 80-plus story building is in the area of Manhattan known as TriBeCa, and is being developed by Silverstein Properties.

The design of 2 WTC is said to have derived from its urban context at the meeting point between two very different neighbourhoods­ – the Financial District with its modernist skyscrapers and TriBeCa with its lofts and roof gardens.

The building is aligned along the axis of World Trade Center Master Planner Daniel Libeskind’s Wedge of Light plaza to preserve the views to St Paul’s Chapel from the memorial park.

Bjarke Ingels, founding partner of BIG, said, “The completion of the World Trade Center will restore the majestic skyline of Manhattan and unite the streetscapes of TriBeCa with the towers downtown. To complete this urban reunification, we propose a tower that will feel equally at home in TriBeCa and the World Trade Center.”

He said, “From TriBeCa, the home of lofts and roof gardens, it will appear like a vertical village of singular buildings stacked on top of each other to create parks and plazas in the sky.

Larry A Silverstein, chairman of Silverstein Properties, said, “Bjarke Ingels is one of the most innovative and exciting architects in the world today. His conceptual design for 2 WTC fits perfectly into the World Trade Center site, as part of Daniel Libeskind’s master plan, and alongside the outstanding work of David Childs, Richard Rogers, Fumihiko Maki and Santiago Calatrava.”

Seven separate building sizes and depths are stacked on top of each other, creating 38,000ft2 (3,530m2) of outdoor terraces.

The base of the building uses the maximum area of the site, housing TV studios and 100,000ft2 (9,290m2) of retail space over multiple levels.

The project is expected to be finished in 2020.