Zero emissions in the far north

Since 1959, the company Paekivitoodete Tehas (Limestone Factory) has supplied high quality mineral and aggregates for the Estonian road and construction industry. From 1989, the former state-owned enterprise was gradually transformed into a private company and developed into one of Estonia’s leading construction materials suppliers, under today’s chairman of the board and majority shareholder Vladimir Libman.

Today, up to 20% of the country’s annual demand for crushed aggregates comes from the quarries in Väo and Maardu, which together extract 750,000 t per year.

On the Baltic coast, limestone is found close to the surface in small widths of 5 to 6 m (16 to 20 ft). In the past, the company used three decentralised stationary processing units (totalling 400 t/hr), whose raw materials, intermediate and end products had to be extensively hauled by rigid trucks.

This low-efficiency operation became problematic, as the mining zone with its dust and noise emissions, moved ever closer to the equally rapidly expanding Tallinn residential district of Lasnamäe and its 120,000 population.

To replace the installation, a mobile processing line to produce the most important aggregates and intermediates 0/4, 4/16, 16/32, 32/63 mm was favoured for the main site as well as for temporary operations in the smaller Maardu quarry 10 km (six miles) away.

After several months of market evaluation, management decided on the technical solution from Keestrack, consisting of the R6e track-mounted impact crusher Keestrack R6e with a connected C6e three-deck classifier. The diesel-electric drive concept of the Keestrack “e” versions with plug-in option to the local power grid was the decisive factor.

“We were able to realise the customer’s all-electric operation in the Väo quarry with all the advantages of our track-mounted technology,” said Ing Johann Prüwasser, CEO of Keestrack Engineering/Laakirchen, the Austrian design and development part of the group.

Two 200 m (656 ft) cables from the specially installed 400 V transformer station on the quarry floor now feed the R6e and C6e, directly connected to the crusher via power supply and communication cable for data exchange between the plant controls.

Powerful electric motors for the crusher drive (250 kW) and the pump units of the central plant hydraulics as well as electric belt drives and ancillary units enable complete emission-free operation. If the plant combination is relocated during the extraction process, both plants simply disconnect from the grid and follow the excavator on their own, using their on-board diesel/generators units.

The three-man working teams now reach the daily target of 3,000 t in one long or two short shifts, which brings significant savings compared to the original three-shift, 15-man system. 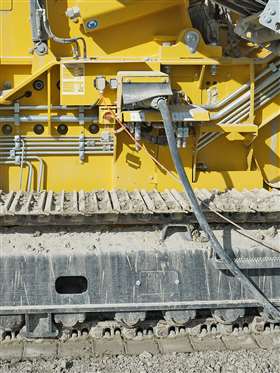 The Keestrack R6e plug-out connector supplies the C6e three-deck classifier, with a data cable enabling communication of the plant controls

According to Keestrack, compared to the diesel-electric operation, the operating cost advantage thanks to cheaper grid power is just under €100,000 (US$111,000) a year. The reduction of pollutant emissions on site is also significant: around 400 t per year of climate-damaging carbon dioxide is avoided by the fully electric processing alone.

Part of the Keestrack network

The importance of the completed project with its total investment volume just under €1 million ($1.11 million), funded by 35% through the Estonian Environmental Investment Centre using European Union regional funding, was also demonstrated by the presence of numerous high-ranking representatives from politics and business at the official start up.

The customer has also become part of the international Keestrack network.

From September 2019, Paekivitoodete Tehas took over sales and service representation in Estonia and Latvia.